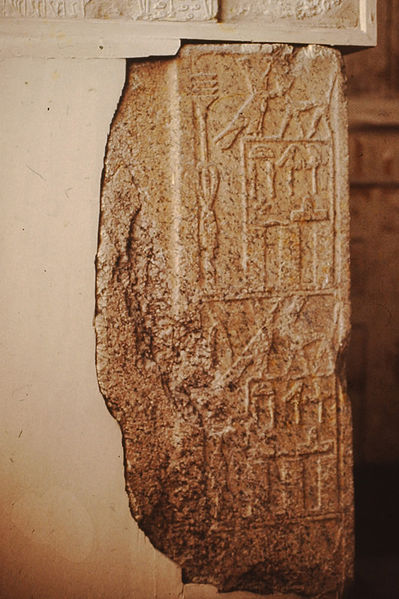 “The Two Lords are at peace in him.” How do we grope towards learning the meaning of that?

Most of the remains of the Early Dynastic period of Egypt are tombs. Has economics always been about waste? Now, Chinese make televisions which must be superseded and replaced every three years, and Britain spends on nuclear submarines, then craftsmen made beautiful things to bury in tombs, such as that of Khasekhemwy in the early dynastic period (before 2686BC) which had 58 rooms in a gallery 68m long and 39.4m wide at its widest point. The division between the Early Dynastic and the Old Kingdom is modern- the kings were related- but justified by King Djoser’s innovation in tomb architecture, his step pyramid, 109x125x63m and clad in polished white limestone.

Flinders Petrie in the 19th century proposed a way of arranging the chronology of the Naqada period, the fourth millennium BC, by the development of ceramics, and this has been supplemented but not superseded by dendrochronology, carbon dating and thermoluminescence. We can know so much: but writing begins to tell stories.

The earliest surviving writing includes the names of kings in the Serekh, as on the Narmer Palette. The serekh is at the top between the Goddess heads: the cone is the name, under a bird- we read back later symbols, and say this is the falcon Horus. The cricket-stumps to either side are colonnades, representing the palace.

Writing began in Naqada III, around 3200-3000 BC. Hieroglyphs survive on the seals of the king and his officers, their names and titles, and identifying goods and their places of origin. Texts ordered by grammar came later. From the middle of the first dynasty there are symbols for the year of the king’s reign.

Khasekhemwy’s predecessor, Peribsen, used a serekh surmounted by the hound or jackal symbolising Seth rather than the usual falcon of Horus. I thought Seth the Enemy, first from Doctor Who- The Pyramids of Mars– and then Norman Mailer, Ancient Evenings. He sought to destroy his brother Osiris, but Isis collected Osiris’ body-parts and resurrected him as Horus. We know these stories from documents such as The Contendings of Horus and Seth, but that is 1600 years later.

An enemy God but a blood relation: in such stories Gods could symbolise tribes or individuals, as Robert Graves reports in The Greek Myths. In Khasekhemwy, the two lords- Horus and Seth?- are at peace. By reconciliation, or by conquest? By reconciliation, I say: it is my character to prefer reconciliation to conquest; but also in the Narmer Palette and elsewhere I see kings destroying their enemies, clubbing them, trampling their corpses, and there are those headless corpses carefully laid out for ritual- so, for conquest “The One Lord is Supreme” seems more likely to me.

“The Two Lords are at peace in him.” I know almost nothing of Khasekhemwy. I have taken much of this from The Oxford History of Ancient Egypt, but my understanding, and my writing, is filtered through me.