I cycled to worship ten miles on country roads, in brilliant sunshine, and stopped a couple of times to photograph wild flowers. A tiny splash of colour seen for an instant delights me, but they repay greater attention.

At the parish church, families leave their cars to worship. “Good morning!” said a woman as I pedalled past. “Happy Easter!” I replied. “Oh, well done,” she said, the slight hint of sarcasm not displeasing me. I had thought of saying “Christ is risen!” but forebore.

Ministry included a quote- if you see everything as if you saw it for the first time or the last, you will live surrounded by glory. 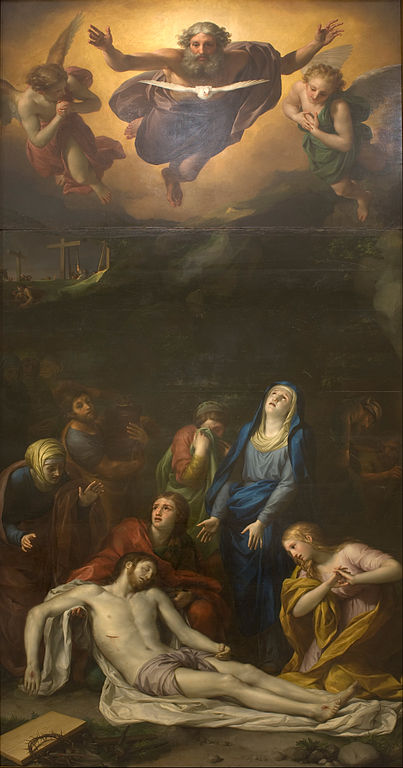 Substitutionary Atonement- the notion that Jesus was the sinless sacrifice offered by God to Himself to atone for our sins- was only fully worked out by Anselm, Archbishop of Canterbury in the 11th century. Prior to that, one mediaeval understanding was that God was like our feudal overlord, and after we gave false allegiance to the devil God bought our vassalage back. Substitution became central in Reformation theology, as the basis of “Radical grace”: God has abolished the system of requirements for righteousness. We have nothing to bring to God: God comes to us. Unfortunately, it became the centre of a new system of requirements: you must believe to be saved from Hell. This is valuable for a church which seeks authority over its members: they have the keys to the Kingdom. Only through them can you be Saved.

Instead, Jesus proclaims the truth to the Jews, throughout Galilee and ending in the capital, Jerusalem. This truth challenges the basis of human domination, by the aristocrats of Judea and by the Roman Empire, and is a threat to those in power. Jesus refuses to buckle under to the Domination system, but also refuses to resist: not only does he not call forth an army of angels to rescue him, he does not call on the crowd who welcomed him– surely a different crowd from that which called for his blood.

Violence begets violence. Jesus offers us a pattern and example for breaking the cycle of violence. If Jesus had resisted, he would have contributed to the cycle of repression and rebellion, violence and death. Jesus confronts human fear and the desire for control, and shows us the more excellent way of Love. Matthew reports that this is recognised by the Roman Empire, as symbolised by the Centurion: “Truly this man was God’s son“. Before the time of Christ, God revealed that sacrifice was not the way: “I desire mercy, not sacrifice”.

For Paul, the Crucifixion is central to the Faith: “We proclaim Christ crucified“. The rulers of the world are doomed to perish before God’s wisdom of Love. Christ died for us, showing the depth of God’s love. I have been crucified with Christ; and it is no longer I who live, but it is Christ who lives in me.

The root of the word “sacrifice” is to make sacred. Jesus’ death has become sacred for us. Jesus, our Passover lamb, is our food, as it was for the Jews. We take Love into ourselves.

53 Who has believed our message
and to whom has the arm of the Lord been revealed?
2 He grew up before him like a tender shoot,
and like a root out of dry ground.
He had no beauty or majesty to attract us to him,
nothing in his appearance that we should desire him.
3 He was despised and rejected by mankind,
a man of suffering, and familiar with pain.
Like one from whom people hide their faces
he was despised, and we held him in low esteem.

4 Surely he took up our pain
and bore our suffering,
yet we considered him punished by God,
stricken by him, and afflicted.
5 But he was pierced for our transgressions,
he was crushed for our iniquities;
the punishment that brought us peace was on him,
and by his wounds we are healed.
6 We all, like sheep, have gone astray,
each of us has turned to our own way;
and the Lord has laid on him
the iniquity of us all.

7 He was oppressed and afflicted,
yet he did not open his mouth;
he was led like a lamb to the slaughter,
and as a sheep before its shearers is silent,
so he did not open his mouth.
8 By oppression[a] and judgment he was taken away.
Yet who of his generation protested?
For he was cut off from the land of the living;
for the transgression of my people he was punished.[b]
9 He was assigned a grave with the wicked,
and with the rich in his death,
though he had done no violence,
nor was any deceit in his mouth.

10 Yet it was the Lord’s will to crush him and cause him to suffer,
and though the Lord makes[c] his life an offering for sin,
he will see his offspring and prolong his days,
and the will of the Lord will prosper in his hand.
11 After he has suffered,
he will see the light of life[d] and be satisfied;[e]
by his knowledge[f] my righteous servant will justify many,
and he will bear their iniquities.
12 Therefore I will give him a portion among the great,[g]
and he will divide the spoils with the strong,[h]
because he poured out his life unto death,
and was numbered with the transgressors.
For he bore the sin of many,
and made intercession for the transgressors. I cannot interpret this for you. I wish to do something more, and less: to react to it.

Parts of it are so familiar: “a man of sorrows, and acquainted with grief”, I would say; and we like sheep– doesn’t everyone? I note that while my Isaiah quote from Sunday was in the first person, this is in the third: though the suffering is similar, this is a man whose sandals the prophet would hardly dare to untie.

I look at prophecy as about human beings, rather than divinity, and about earthly events rather than an unearthly spiritual realm. There is the penal substitution theory of Easter, that God demands a sacrifice for sin, and provides the Son to be that sacrifice. This contradicts “I desire mercy not sacrifice”, Hosea 6:6 which Jesus quotes in Matthew 12:7, and the story of Abraham and Isaac: it is not a sacrifice if you burn what you find. This Isaiah passage may be read along with that theory, but I do not think it supports it.

Isaiah realises that if there is a new paradigm, a new way of being, it will appear to everyone else like something crazy- or we would all be doing it. There is nothing in the Servant’s appearance that we should desire him, because we do not have eyes to see. So we despise him.

So he was pierced for our iniquities. There is no mention, here, of sacrifice. The Lord makes the Servant’s life an offering for sin, but an offering to whom? It is an offering to us, just as God offered the ram to Abraham. The punishment brings us peace because it is catharsis: we see the horror, and are changed by it. The change is in us, and not in God.

He was led like a lamb to the slaughter, but he did not open his mouth, leave alone give more active resistance. He has done no wrong, and that is what we cannot bear about him.

In verse 12, I prefer the footnotes: I will give him a portion among the many, and he will divide the spoils with the numerous. The sacrifice is for everyone. All may learn the lesson of non-violence that it teaches.

After he has suffered he will see and be satisfied. I give this a naturalistic interpretation too. On the Cross, It is finished. The work has been done. So I am left with no description of Resurrection at all, apart from in the hearts of those who have knowledge of Him.

“Easter” comes from the pagan goddess Oestre, of Spring and therefore fertility and love. The French Pâques, from Latin Pascha, is in English as “paschal”, as in “Paschal candle” or “Paschal lamb”, making me think of sacrifice, but which in late Middle English referred to Passover or Easter. German for Easter is Ostern, close to our old English: Angles and Germans use our pagan roots, unlike the Romance languages closer to the core of the Roman Empire- though Swedish is påsk. Establishing freedom from Swedish rule in the 19th century, Norwegians consciously worked to differentiate their language from Swedish, but retain the word påske.

Can I do yoga as a Christian? Of course: just as we built churches on pagan holy sites, we “baptise” it: take its holiness and beauty for our use.

What is the Resurrection? If Jesus just comes to life again, does his sacrifice have any meaning?

Christ’s sacrifice is aimed at the wrath of man, not of God. Left to ourselves we seek to control, for all sorts of positive reasons, leading to fear, hostility to outsiders, and killing rebels. Jesus faces this with non-violent resistance. His sacrifice is our example, a practical rather than magical/spiritual event: by his non-resistance he draws the poison from the murder. As Isaiah foresaw:

I offered my back to those who beat me, my cheeks to those who pulled out my beard;
I did not hide my face
from mocking and spitting.
7 Because the Sovereign Lord helps me,
I will not be disgraced.
Therefore have I set my face like flint,
and I know I will not be put to shame.

The shame is not in the treatment designed to shame, but in being broken by it.

And then- the Resurrection. Does that not nullify the sacrifice? It is almost bearable, if you know you will come to life again. No, it symbolises the transformative nature of the sacrifice. We can create a better world.

Quakers do not count any day holier than any other. This is a positive, not negative thing: it is not that Easter Sunday is no holier than any other day, but that no other day is any less holy. And yet it seems to me sometimes like a rebellion against the alternative view, rather than a transcending of it to something better. I see value in the rhythm of the Christian year: Advent then Christmas, Epiphany, Lent then Easter, Pentecost.