The Book of Coming Forth by Day is the Ancient Egyptian guide for the soul, coming into the radiance of Re the Sun, Creator and King of the Gods, after the death of the body. The first such spells are more than five thousand years old.

The earliest extant spells for the dead are the Pyramid Texts, first found carved on the wall of the burial chamber of King Wenis, last ruler of the fifth dynasty, around 2345 BC. One of the spells tells the king to cast the sand from his face, thought to be an allusion to burial in the desert, the practice in the Pre-dynastic period. Others indicate that the King will live among the stars, an earlier belief than life with the Sun.

From the Middle Kingdom, around 2000 BCE, the spells were carved into the coffins of the middle classes. Osiris takes the role of judge of the dead, and the deceased is referred to as Osiris[name]. It is suggested that the Judgment of the Dead was preached as a response to the breakdown of order in the First Intermediate Period, when the rulers of nomes, or regions, ceased to submit to a central King. These Coffin Texts portray an afterlife where the deceased had to work as peasant farmers, to grow food, as in life. To avoid the work, they had shabti figurines placed in the coffins, who would come to life and do it for them.

From the New Kingdom, 1550-1069 BCE, the spells were written on papyrus scrolls, and from the Late Period, about 664 BCE, the order of the spells and their number was fixed at 192. Some of these spells dated from the Pyramid Texts, including spell 174 resurrecting the spirit. In spell 177 the sky-goddess Nut praises the deceased as a Power whom the Nine Gods raise up with their hands. Spell 178 provides for his provisions: he shall swallow the Eye of Horus. Re the Sun commends him to the House of Bread, and takes the deceased with him across the sky, that he might eat and drink at Re’s feasts. 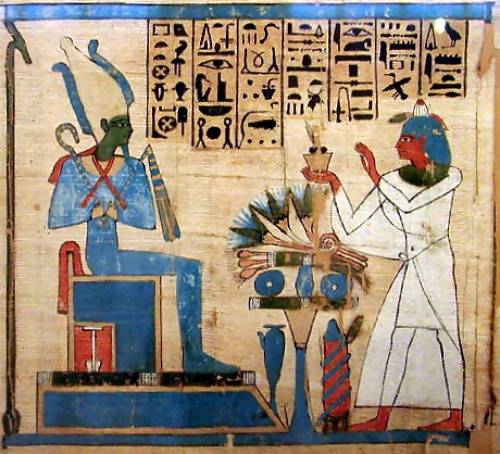 Other spells tell of the judgment of the dead. He passes through the Hall of Justice, where 42 named judges gulp down the blood of those who cherish evil. He justifies himself before each of those judges in turn: O Far-strider who came forth from Heliopolis, I have done no falsehood… O Doubly evil who came forth from Andjet, I have not disputed except as concerned my own property. Most of the accounts are denials, but the deceased also claims virtue: I live on truth, I gulp down truth… I have propitiated God with what he desires; I have given bread to the hungry, water to the thirsty, clothes to the naked and a boat to him who was boatless, I have given god’s offerings to the gods… I am pure of mouth and pure of hands. The spell invokes a blessing on the scribe, who shall be ushered in with the Kings to the suite of Osiris: a matter a million times true.