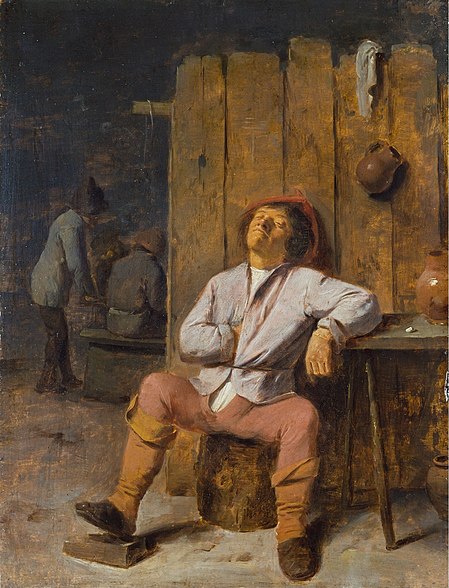 Through our encounter, Cara, aged seven, either sat on her father’s knee or lay on the floor. She was starved of oxygen during birth, and had the most severe brain-damage I have come across: apparently her eyes had been normal, but she was unable either to interpret the signals from them or to dilate her iris according to light levels, so the retinae would be damaged by too much light. She made wordless moans much of the time. Her limbs spasmed. She wore incontinence pads.

On the floor, she would lie still or twitch or writhe. Eating, she needed food pushed into her mouth. Her father treated her with loving care, and she did not seem to show the wild distress of a baby: perhaps he was expert in meeting her needs. He had split from his wife, and they shared her care.

Bangs and thumps from next door, and shouting. The music isn’t as loud as it has been, and tonight it was Dexy’s Midnight Runners: I might, just, listen to that myself. Then I did: maybe not. The parents have been over quite a bit, making sure she’s alright.

Well, what can she do? She can drink, which drives away the demons for a bit, dulls thought and feeling or makes feeling stronger but more bearable, because it can be expressed, then, in shouting or weeping which you might not do when sober. Except she has absorbed the lesson: drinking stops you dealing with problems without making them go away, so makes them worse. Drinking is a Bad Thing.

You do need other ways of dealing with things, though. She can turn her face to the wall, or shout. She has the repertoire of a sulky teenager, which I never developed with my own parents and which does not suit a woman in her forties- Steph, like me, is supposed to be more mature, and I sometimes think what I am doing it just one huge sulk.

All this stuff about Arizona. Blogger wrote that comparing gay rights to civil rights was like comparing the Holocaust to a stubbed toe, and one of his commenters compared a gay commenter to Satan. Well- slavery then segregation were appalling, but so were legal persecution and homophobic violence. Quickly Googling, I found this Guardian article and commented with a link. One responded that the deaths are suicides, so “that doesn’t quite equate to the Holocaust”, and another that gangs are known for random acts of violence so the attack might have been for any reason.

Is it good news that people don’t often get murdered for being gay? In London, there has not been a homophobic murder since 2009/10. I read the words “transphobic murder” (one investigated in London in 2009/10) and feel a multitude of feelings, and I do not like it being compared to a stubbed toe. There are not many of us: fewer than three thousand gender recognition certificates have been issued, so one of us murdered gives a murder rate thirty times that of straights. I know it is too small a sample for accurate comparison- so?

Lower down the scale, in 2012/13 in London there were fifty transphobic and 1008 homophobic hate crimes reported. I think back to experiences: no, I did not report when that man tried to push me in front of a car. There was a scuffle on a pavement, with me and him as witnesses, and he did not succeed. My word is not proof beyond reasonable doubt, so such a case would get nowhere, not as far as the CPS, even if I could identify him; and I wanted to go home and calm down, not get something done about it. In surveys as opposed to crime reports, a trans woman might

experience what is a crime once a week. My friend, knowing the streets better than I, insisted on ferrying me by car rather than let me use buses alone at night.

The British Crime Survey asks people their experience of crime, their confidence in the police and their sexuality. 0.7% in London say we are gay. That low percentage is because this is a doorstep survey and people do not wish to reveal their sexuality: the Government uses the figure 5-7% of the population. The BCS says that 57% of hate crimes go unreported, and one in fourteen LGB people experience violence each year, compared to one in 33 of the general population.

This is not like Russia with organised groups seeking out gay people to humiliate. It is a Civil Rights issue. It is not as bad as what black people suffered in parts of the US until the sixties; and that is no excuse for it. Seeking to diminish the violence against us is seeking to excuse it.

Jolyn said she believed gay sex is sinful. I responded:

“OK, you can believe homosexual sex is sinful. However the problem is that many teenage gay people believe it is sinful too, because they have been told so by others, and are damaged by the distress they suffer, even to killing themselves. People are bullied because of homosexuality or perceived homosexuality.

“We could agree to disagree, even worship together, because what we share- the desire to follow Christ- is so much more important than what divides us. But if you state your belief in public, however gently, you give aid and comfort to the bullies, and heap distress on the heads of the gay people who are bullied.

“I hope you accept that homosexual desire is so deep-seated that it cannot be said to be a choice. The choice, then, is between celibacy and a loving gay relationship. You can decide that you do not want to have gay sex. I am fine with that. I am less fine with you telling others that you think they should be celibate. What right have you to say that?”

We do not speak or write in a vacuum. What we say has an effect on others. The thing is, I have some sympathy with people who wish to show respect to the Bible, and not just ignore what it says, and people who take their religion seriously. I can understand Jolyn being upset to be called a “hater” for her honestly held religious views. I have no respect for people who deny reality and claim that homosexuality is a choice, but a commonly held reading of the Bible is that it condemns gay sex, and people have lots of reasons for adhering to Christianity.

I have less respect after her response. Why, she asks, is bullying for sexuality considered so much more important than other reasons for bullying? It isn’t, actually. People take body image issues more and more seriously. I have sympathy for her being bullied over being studious at school, but if that could not be prevented, encouraging bullying of gay people hardly makes things better. She does not want her children “confused” by “displays” of her friends’ homosexuality- so we must all pretend to be straight. Having adults pretending all the time, never saying what they really feel, confuses and harms children. It teaches them feelings are something to be ashamed of.

If a gay friend tells Jolyn of his great night out with a new boyfriend, and Jolyn says she disapproves, I don’t think that does huge harm to that friend- but it does no harm at all to Jolyn. People disagree. We think differently and feel differently, and we still rub along together OK.

What harm does Jolyn suffer if she sees a gay kiss on a TV drama, or reads about an out gay man in a magazine? She learns that other people think differently from her, even that they have different disgust reactions. It may be more comfortable if everyone appears to think and feel the same way, but it is more mature to tolerate difference. Which of us is going to Hell is God’s decision, not Jolyn’s.

And- have a look at Neil’s video. You might say that it is crude and manipulative- the music takes you inside the emotional world of the victim, rather than the bully or a bystander- but can you conceive of any circumstances in which you are on the side of the bully, rather than the victim, and his many courageous supporters?