Pride in London is today, but 1 July was the 50th anniversary of the first Pride march here, and some of us who thought the official Pride unduly corporate, wanted to mark the anniversary, or just wanted a good time, marched then, led by the Gay Liberation Front and people who were there the first time.

I had not arranged to meet anyone, but it would be a friendly crowd, and I would get chatting. On the train down, Debbie, an auditor, started a conversation, initially about auditing, and then about her cousin who is gay and does ballroom dancing in drag. I got to St Martin’s as the speeches were starting, and borrowed the flag.

I had lots of conversations about God. One man had a shirt reading “Lose religion, Find divinity”, and we talked of the inner light. God in me meets God in you.

People here are quite left-wing. Later we were chanting “Boris Johnson’s a Fascist!”

A woman had a loudhailer and was leading chants such as

We’re not free till Everyone’s free!

I asked if she would do one on trans, and she gave me the microphone. So I led on

Sophie said I should include nonbinary. I had been thinking that, and not wanting it to be too unwieldy. So I followed with

Unfortunately Carbon Neutral 2025 had no takers. But Our Bodies Our Choice did.

There were not many Black people. I salute and support this woman.

She is Iranian. I said, “You can transition in Iran,” and she said, she wanted to find out about that when she could see it free from the veil of the Western gaze. Later, she was naked but for those boots and a thong. 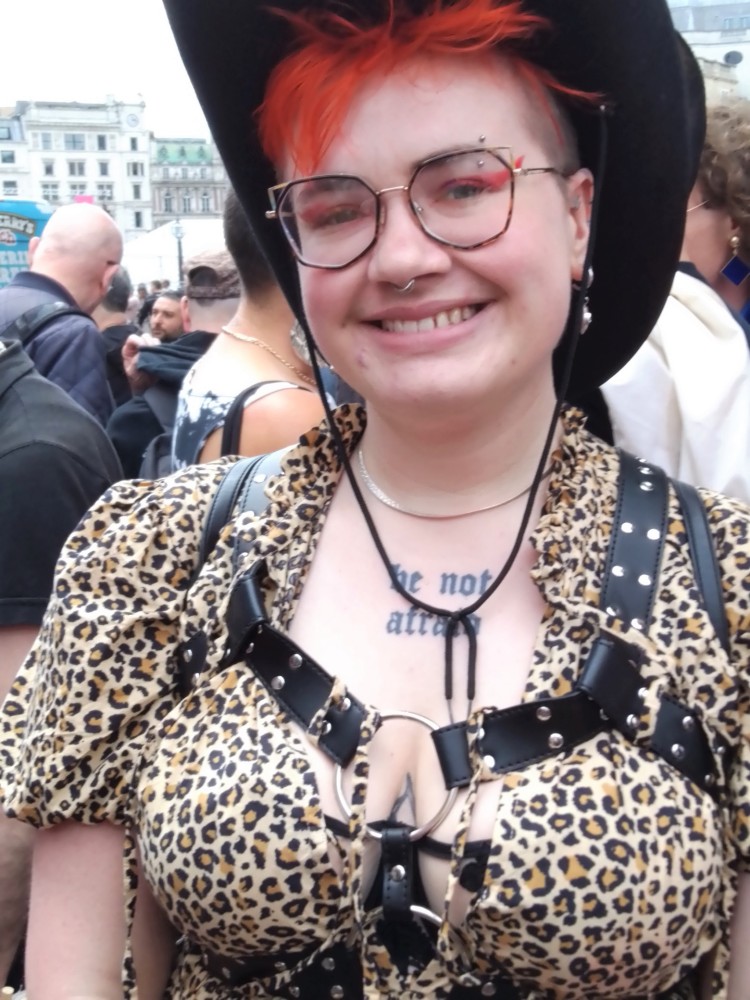 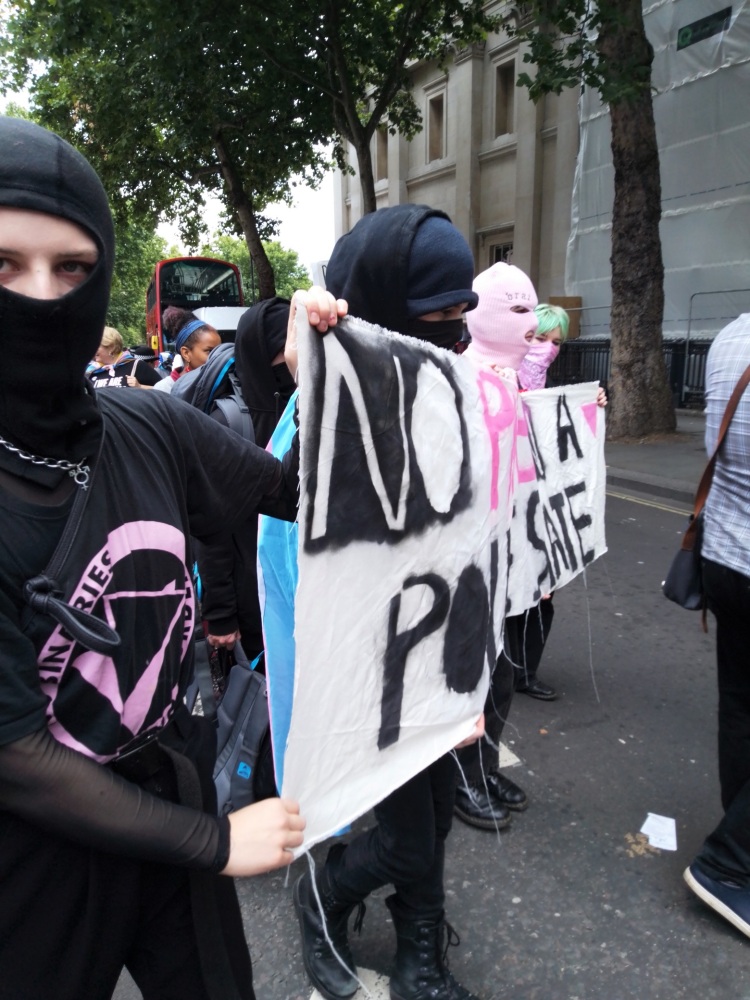 No Pride in a police state was the edgiest banner, and it was a bit hot for those balaclavas.

There are serious protestors here. Some work to stop deportation flights. The Home Office repeatedly refuse to believe people are gay.

Onlookers. A car tried to drive through the march from a side street. Someone stood and put her hands on the bonnet, and the car edged forward, a dangerous move prompting anger from the crowd. We heard later the woman driving had been arrested.

This was the banner from St Martins, and I helped carry it. We chanted “Trans rights are human rights.” Trans is the LGBT issue where the forces of Neoliberalism are attacking right now, so LGB are behind us. 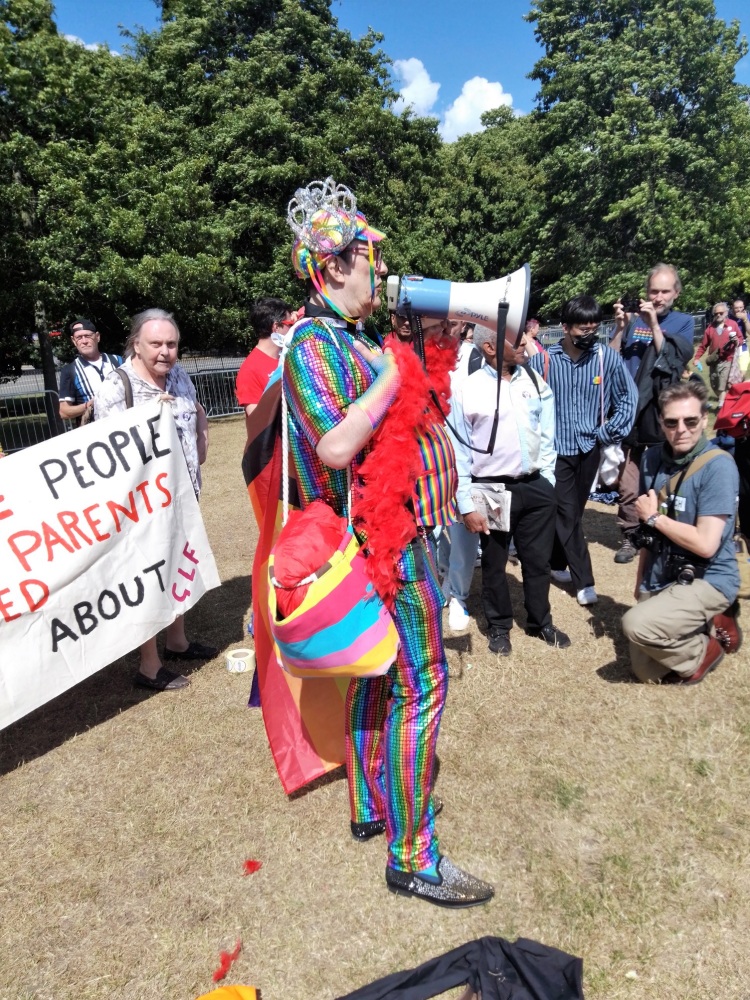 And then, the speeches, in Hyde Park. I caught a man’s eye, and found he is Chris. Do we know each other? Finally we work out we met at Queer Spirit.

After the speeches, someone said that a man had been arrested and was being held in a police van, and some people were standing vigil round the van. There is no requirement, and would anyone like to join them? A few of us went over. We stood quietly as about seven policemen and one woman hung around the van marked “Territorial Support Group”- not the sort of support group we like, we joked. I met some strong, capable dykes and dapper trans men. One approached them and asked what he was being arrested for, and as we did not know him the police officer said he was not obliged to tell us. Their bodycams filmed us, and one of us wore a covid mask. After, the same officer said we would not support the man if we knew what he had been arrested for. We did not attempt to block the van.

At a loose end, I wander off towards Oxford St and meet Chris again. We go to eat: he takes me to the Hare Krishna place at the other end of Oxford St. You could chant in their temple next door, but he does not- they are the Evangelical Christians of Hinduism. Again we talk of God within. He saw the face of Christ in a guru in India.

At St Pancras station I play the piano. A French toddler is fascinated, and her mother compliments me. I asked the daughter in English if she would like to play the piano, and she is shy.

It was a completely fabulous day, and I am utterly delighted. 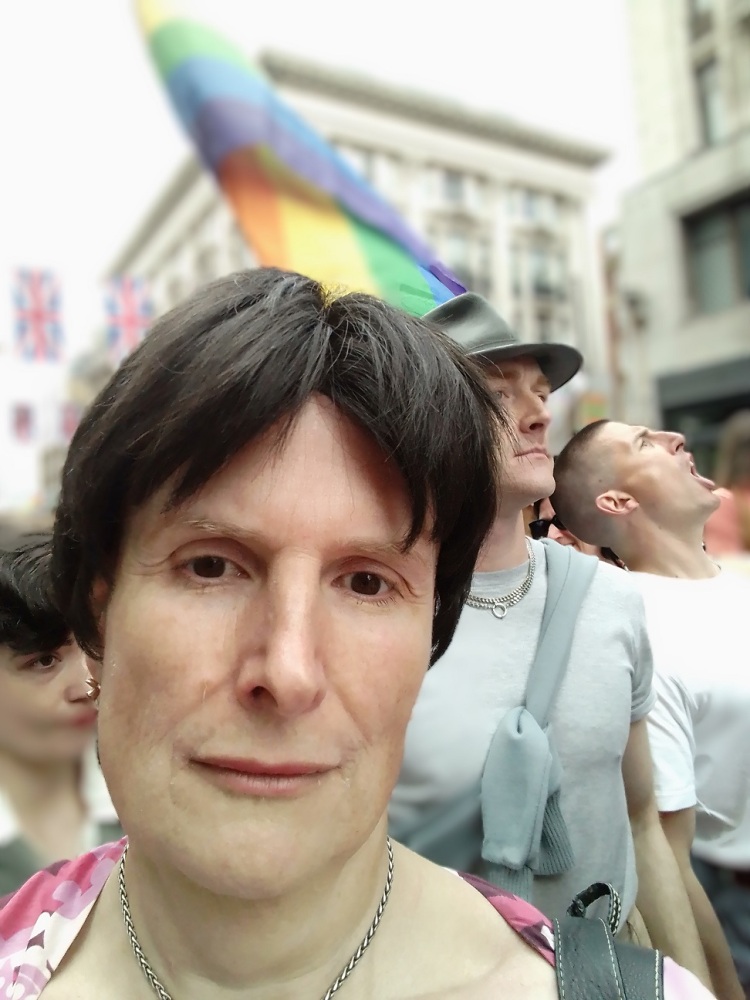 5 thoughts on “Pride is a protest”