How can I cope as a trans activist with all the hostility to trans people, especially in lockdown with all the uncertainty?

Someone shared an Etty Hillesum quote: Ultimately, we have just one moral duty: to reclaim large areas of peace in ourselves, more and more peace, and to reflect it towards others. And the more peace there is in us, the more peace there will be in our troubled world. In Occupied Amsterdam under the Nuremberg Laws, she put that into practice.

Someone wrote, And to claim peace, we must excavate our shadows, make the unconscious conscious, reclaim and accept all parts of self.

Contrast Hilary Mantel’s description of Stephen Gardiner: Master Stephen resents everything about his own situation. He resents that he’s the king’s unacknowledged cousin. He resents that he was put into the church, though the church has done well by him. He resents the fact that someone else has late-night talks with the cardinal, to whom he is confidential secretary. He resents the fact that he’s one of those tall men who are hollow-chested, not much weight behind him; he resents his knowledge that if they met on a dark night, Master Thos. Cromwell would be the one who walked away dusting off his hands and smiling. I know resentment. I know threat and conflict, even fleeing down unknown streets at night. Resentment is curdled anger. Anger may do something about a situation, resentment cannot. Resentment focuses on the “things we cannot change”, but the “wisdom to know the difference” is hard practice, especially if there are few things we can change.

I read that rights for trans women are rights for sex offenders. I object, and read that the statement is unobjectionable, even though I feel anxiety in the supermarket, partly feeling fear, unjustified at the moment, that I might be abused as a trans woman. Etty Hillesum bought toothpaste in a pharmacy, and a public spirited citizen challenged her: as a Jew, was she entitled to buy that? She replied she was. And there are public spirited men wanting to stand up for the rights of women against perverts, by which they mean me, and so far I only meet them on line.

I sat in the Quaker meeting, on Zoom, in my exercise. It is possible to challenge an ASA ruling: can I do that? I want the people who pay to tell everyone that I am dangerous, or might be so that no-one should take the risk, rebuked. And I can’t face doing the reading or the writing to make that happen. The answer comes: I can do it, if I can let go of attachment to outcomes. Taking advantage of a video call where I can mute the microphone, I repeat that to myself aloud. “You want to cling to it, and you stop further messages,” my friend said. Perhaps; and I want to accept it, take it into myself, and act on it, because surrendering the need for a particular outcome is difficult. I have seen that with benefits appeals: if people could accept the loss, and make the appeal because it was the thing they could do at that time, they would be far less stressed; and some of them won their appeals! But that is easy for me to say, and instead, often, they resented. I have seen that expressed as a Law of Change: The individuals and the group may have goals, but they may not have cherished outcomes. It is a hard lesson.

So I wrote my challenge, and sent it off, and now see that it would have been better had I spent more time on it, and read it over and revised it before sending. But I hated it too much to do that. I hated the advert and my hate extended to the work I did against it. I would rather not have to do that work. Or I hate my work because I anticipate it will be inadequate, it will not achieve the goal I desire. I will not work well if I hate what I do, only if I can pour love into it. I read that there is an infinite fountain of Love, which I can bathe in, draw strength from, send to wherever I see needs Love. For example, Etty: I should be quite unable to do the work were I not able to draw each day on that great reservoir of peace and maturity. I read that, but I am not sure I trust it or have learned how to do it yet.

Etty Hillesum is of course my teacher and not my comparator. On 15 July 1942 she was given a job with the Jewish Council, and wrote, Tomorrow I must betake myself to hell, and if I am to do the work properly, I shall have to get in a good night’s sleep… Despite the deadly fear I saw in all those faces. All those faces, my God, those faces! And later, They are merciless, totally without pity. And we must be all the more merciful ourselves. I love her ironic prayer: “Have You any other plans for me, O God?”

A last Géricault. Though this woman is in a room, her desolation is hardly less than the shipwrecked man’s. 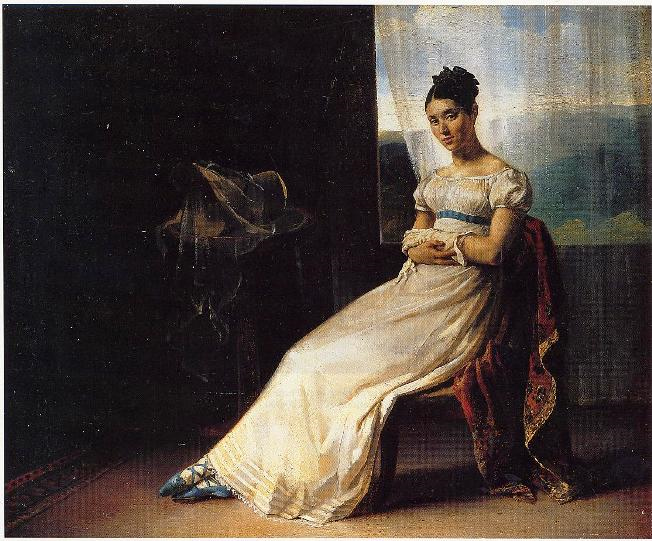 4 thoughts on “Being a Trans Activist”