Marsham St, off Horseferry Road. “Are you arrestable?” asks a man. Er-

“Are you going to be staying?” asks another man. “It’s ok, I am a legal observer.” Well, I say I would move if told to or else. There are a lot of police about. 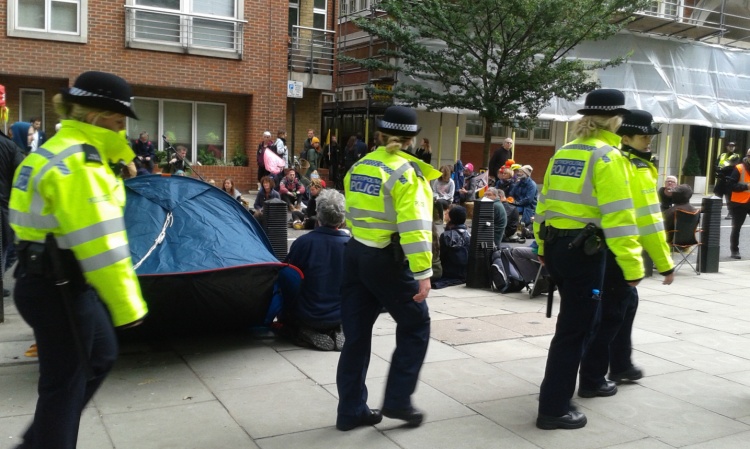 “Have you got a bust card?” he asks sympathetically.

I have. It’s got an expert solicitor’s number on it.

“You look comfortable,” says a woman. Yes. I have a back support to sit on the road. Any fool can be miserable, as the soldier told me.

“If you want to eat could you go up now, as the police might confiscate our equipment,” says a man. When I get there the cooking is closed but someone paid for a delivery from Pret and I take a chocolatey bite.

Now it’s the People’s Assembly. People come up to a microphone. 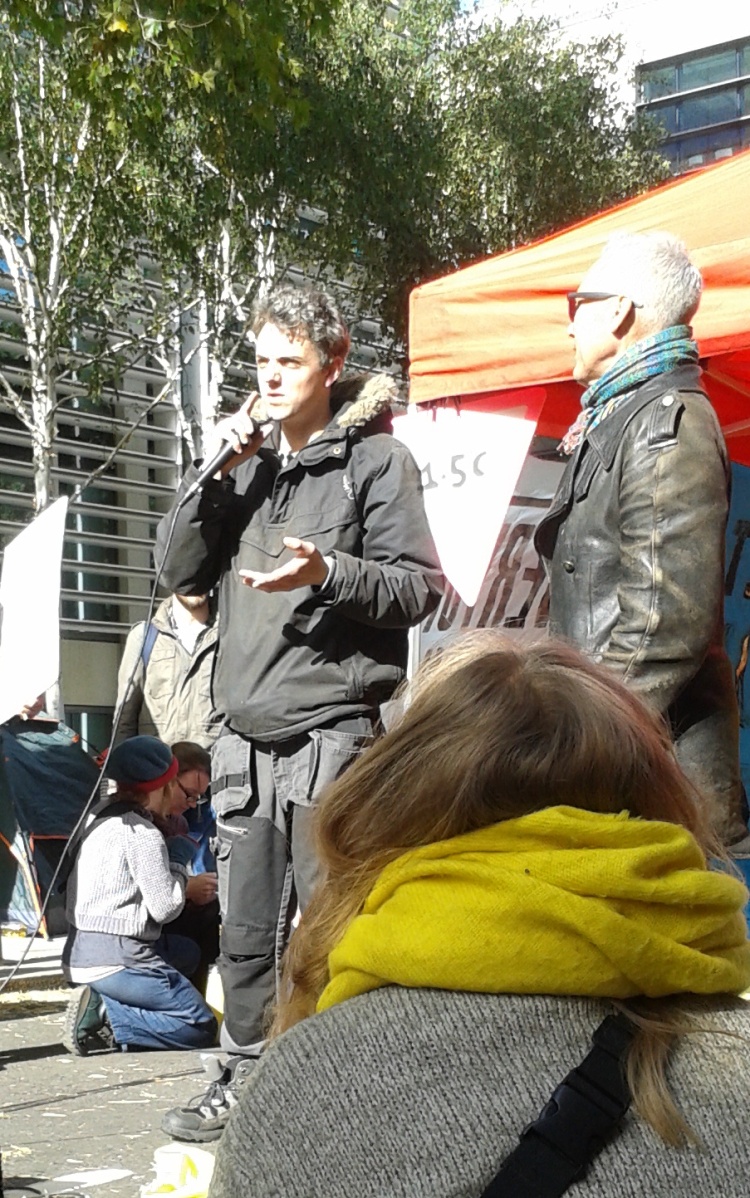 This is the End Times.
This is the real meaning of democracy.
One reads Oriah Mountain Dreamer.

I heard the faith groups were supposed to be in Marsham St but when I got here there are a lot of police about. Various groups came to camp here. A woman sees my Quaker sign and says Quakers should give people a place to keep their stuff so that it won’t get stolen by the police. There was a Buddhist leading and teaching meditation. 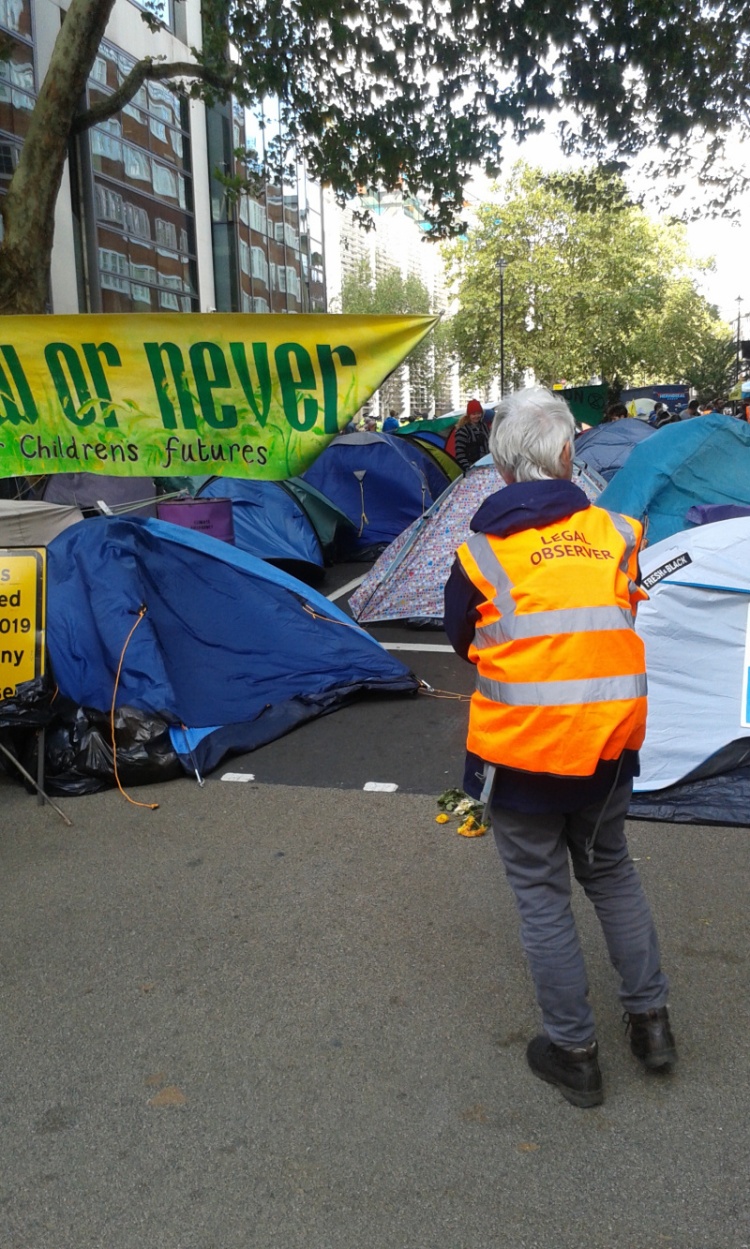 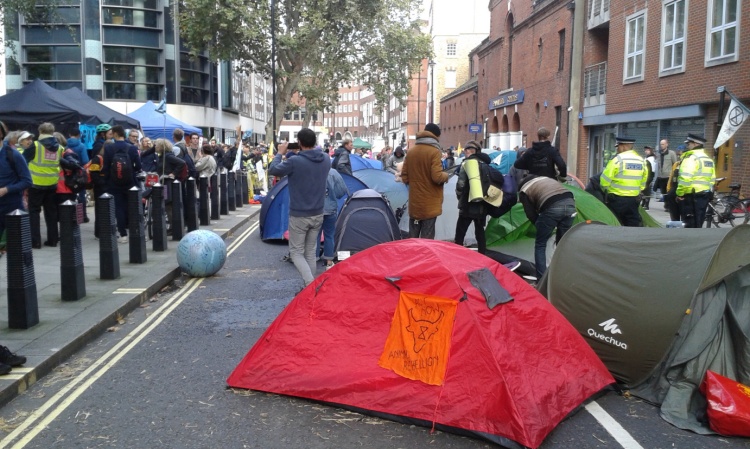 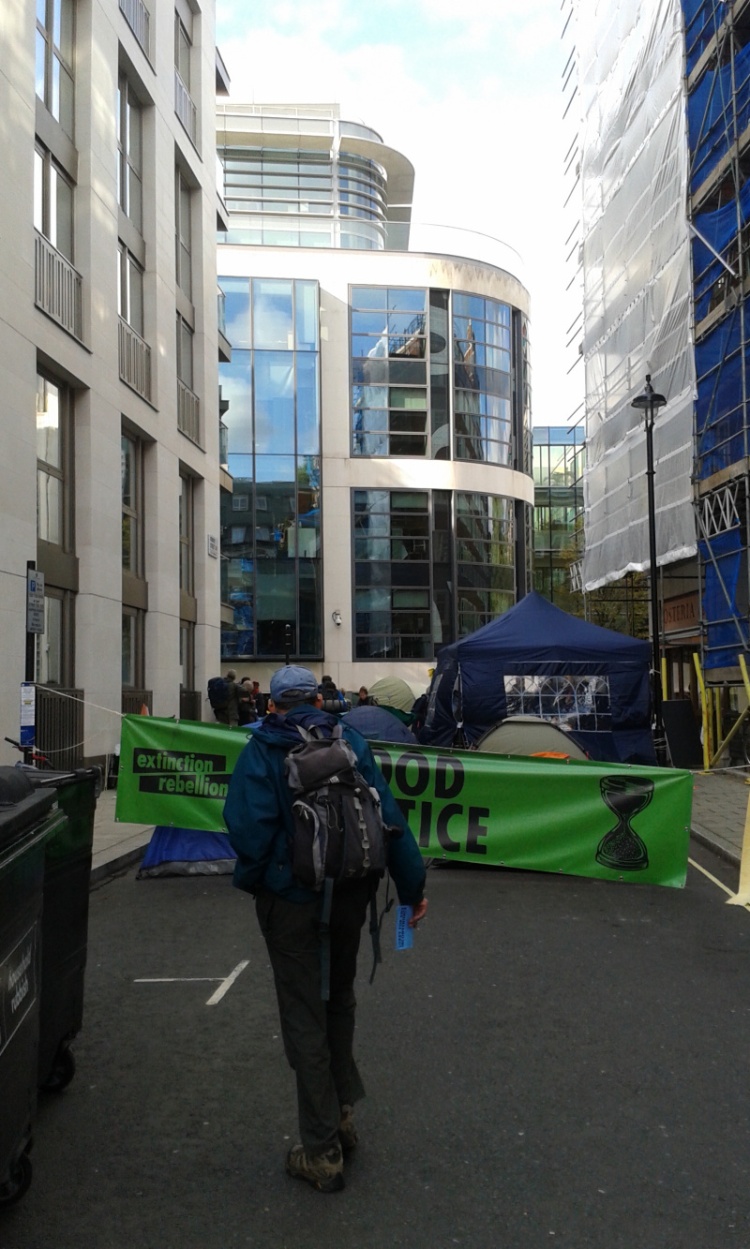 At 12.43 there is an announcement: we will be having a people’s assembly in about twenty minutes as a closing ceremony on this beautiful site, in love and compassion for the police who are massing.

There is a much bigger crowd chanting. Chants include

We are unstoppable
Another world is possible!

I meet a woman who was arrested on Monday. There are no bail conditions, she can be here. She was held for 18 hours in a cell overnight by herself and may be charged through the post later.

I decide to go to Trafalgar Square. The police are accepting people there, and my Friend wants a meeting for worship there. I meet a woman who tells me the churches should be involved, supporting us, and I agree. She used to love singing in the choir but does not Believe the creed; but she finds communion, even reverence, in her women’s group. I give her Advices and Queries.

I am pleasantly surprised by my trip. Whitehall is car free. 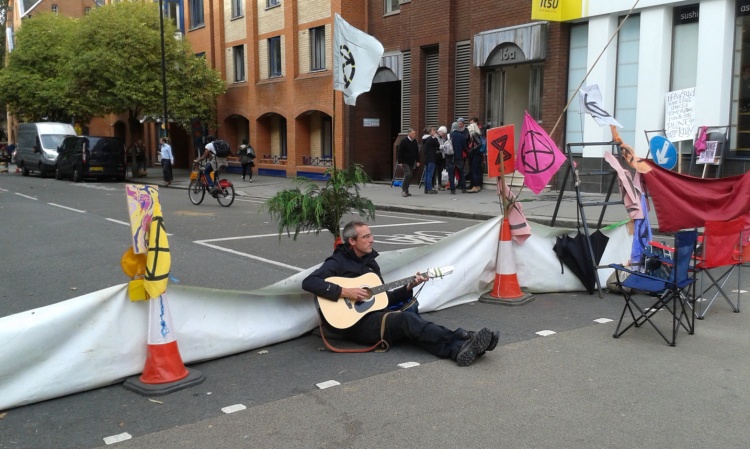 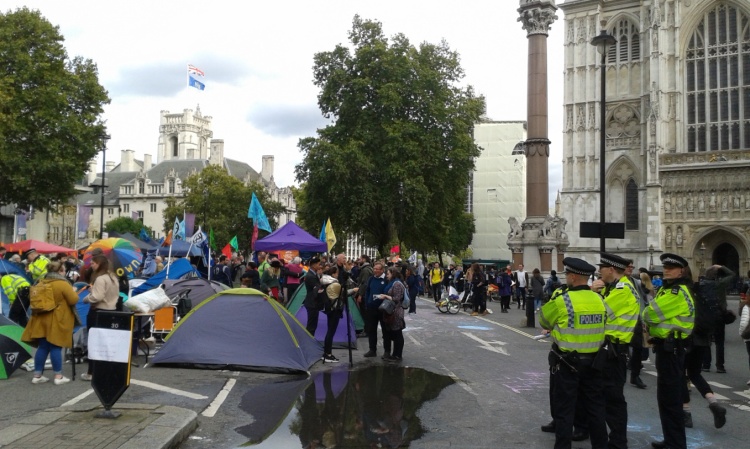 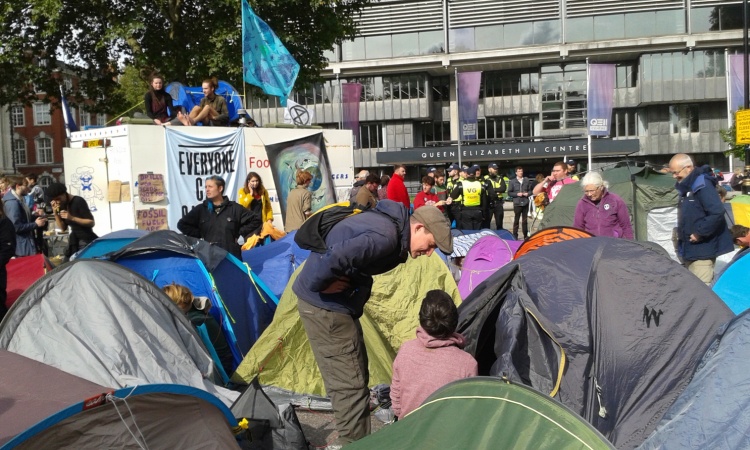 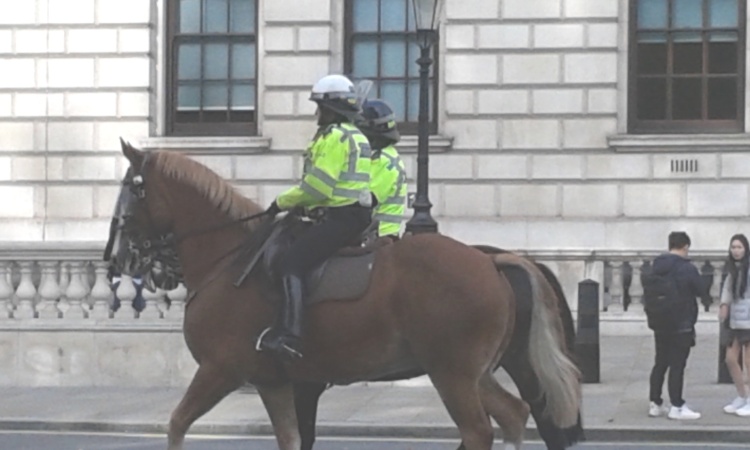 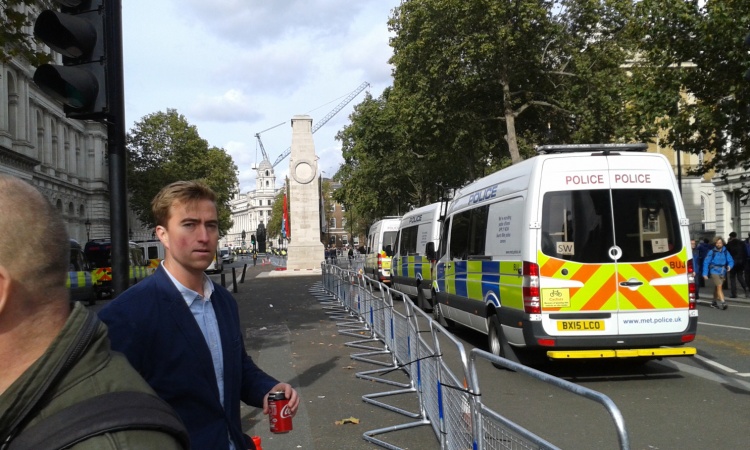 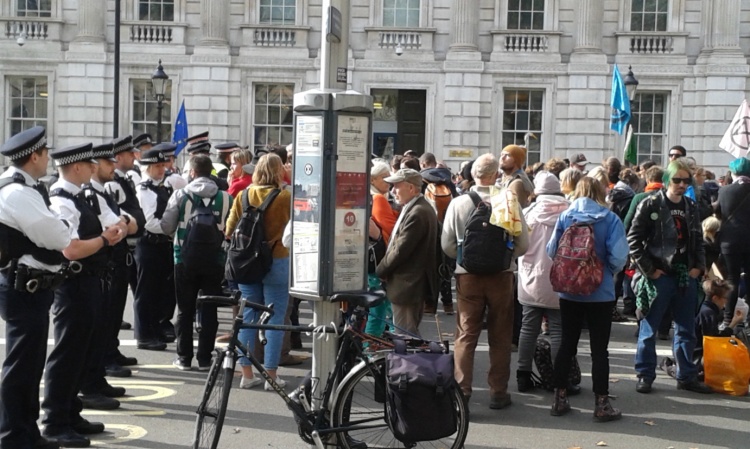 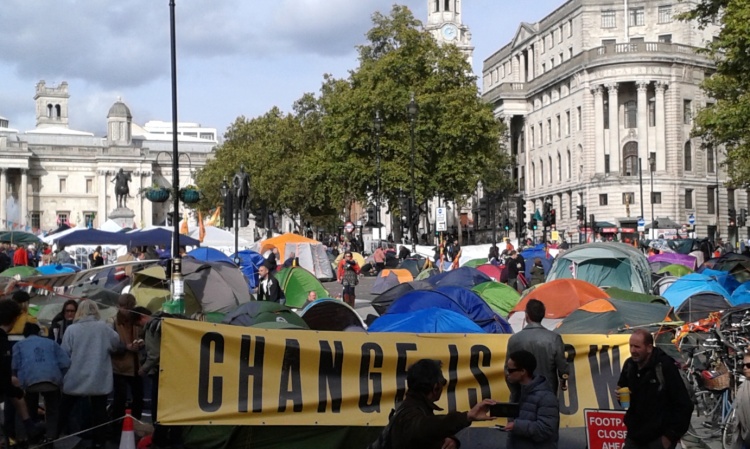 There are speakers and a sense that another world is possible. I get my hot vegan lunch, and sit in the sun chatting to a Friend. 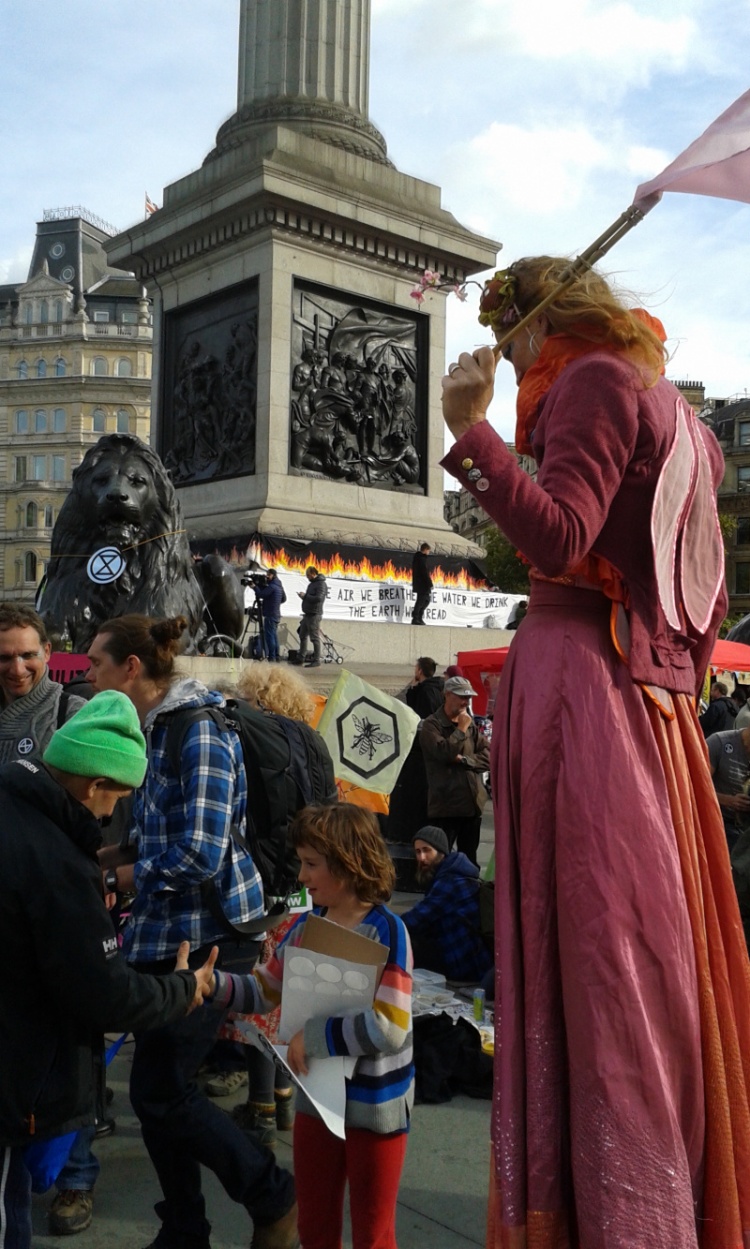 I am listening to a talk on the crisis- a million species at risk of extinction, we use up resources the Earth can replenish by 30 July in the year. In 1969 the equivalent day was 31 December- when a call goes round that the police are trying to clear the roads and will take our food prep tent if we don’t shift it. I go to help move food and equipment.

The police have taken people’s tents off the road and chucked them in a pile like rubbish. It reminds me of Totes Meer by Paul Nash. I passed it this morning when I went into the Tate to see Bacon’s studies for the base of a crucifixion. 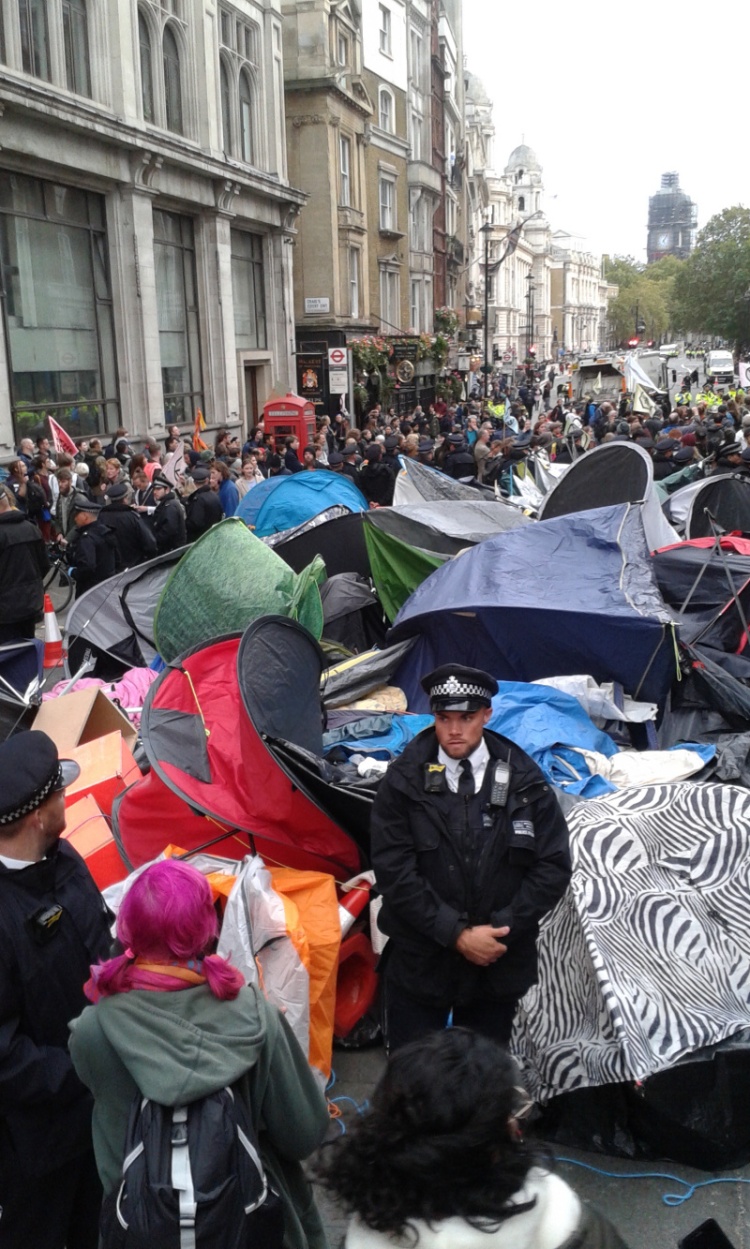 Police are trying to clear people from Whitehall, so I go to support. 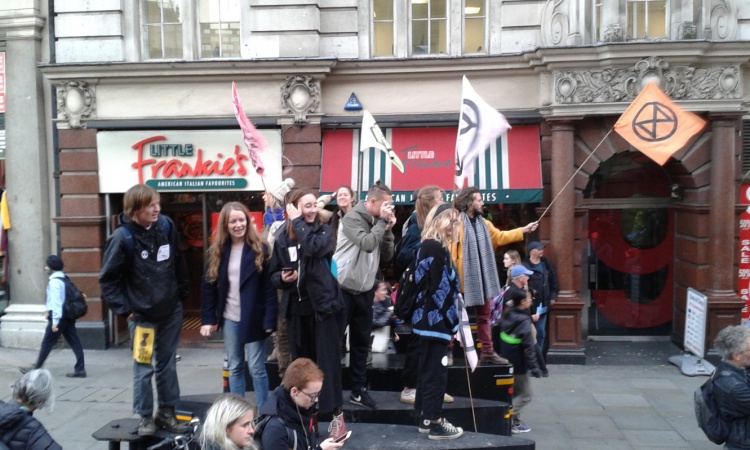 I love the kangaroos. I give one a hug. 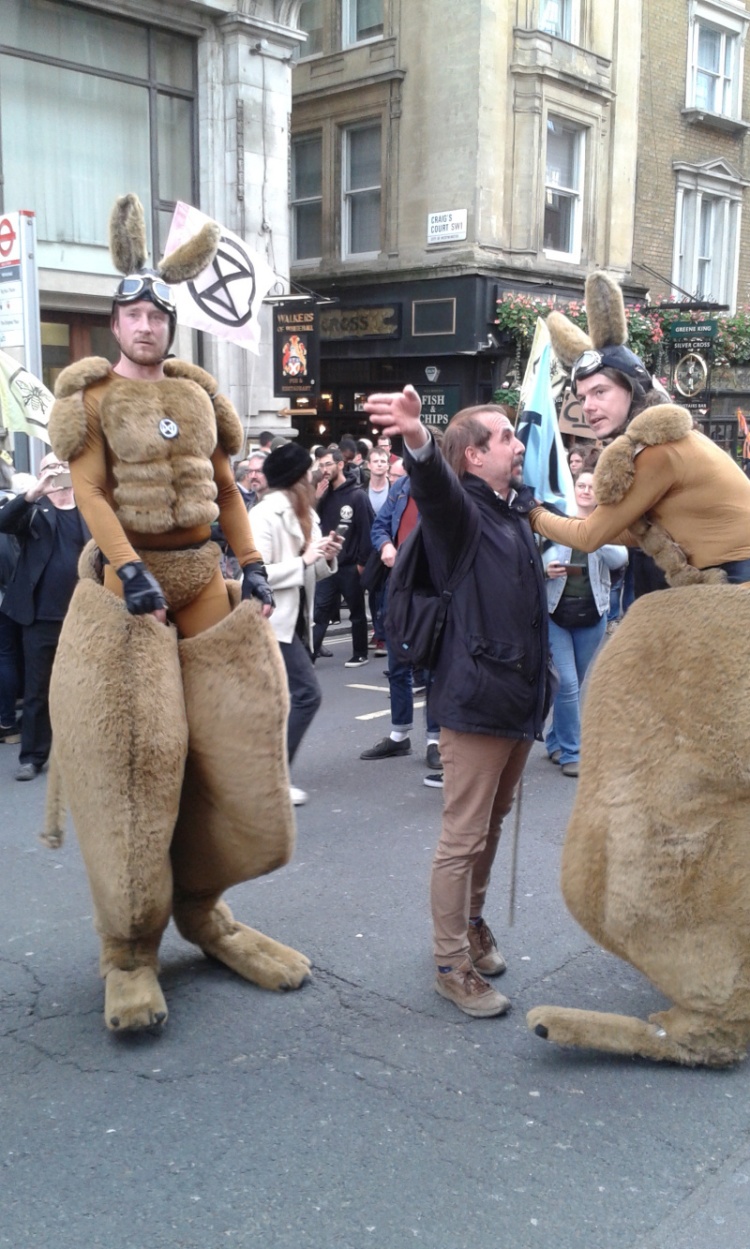 A man is going about with a large amplifier playing jigs. I wondered if we could get a Strip the Willow going, but he is not with us: he has a sign saying “Christ will soon come and set up his own world government in Jerusalem”.

Unfortunately a drunk man starts chatting to me and sticks to me. He wants to go to the police lines, but I tell him XR requests people not to drink before action. He wants to start a fight and I say we are non violent. He follows, touching my arm and talking (“are you a boy?”) as I meander between police lines, then back to the Square, and only leaves when I join two Friends.