Taking the microphone and looking out over the thousand-member audience, I said, “I am wise. Listen to me.”

I am feeling powerfully affirmed right now. I have spoken before in conversation from my integrity, all of me united in a belief or intention. I check it is right and true then say it. As I do this more I become clearer.

Then there was the Queer Spirit festival, 16-18 August. At the Authentic Communicating workshop I talked of this, of the way of speaking from my whole self, and the facilitator addressed me, “Tell us the truth, O wise one”. It is hard to imagine such words without sarcasm, but he said them with utter sincerity. There I saw beautiful playfulness, and a profound shift in a man, shedding his introjects. I asked to be lifted and supported on nine pairs of hands, and was borne aloft. I could trust. Then we group hugged.

That night I left the big top at eleven, and dozily left my handbag in a toilet. I went to that workshop with no money, no house keys, no way of getting home, wondering if I could ask anyone to drive me there. We decided I could ask the festival to loan me enough for a taxi and the buses. At eight, no one had handed in my handbag but after the workshop someone had contacted the organiser, and I went to pick it up from the Faerie area. If there was anyone who would steal it at the festival, they were unlikely to be the one to find it.

I knew no one at Queer Spirit but started conversation easily, asking and receiving hugs. I noticed how forebearing we were with each other, anxious to please as if used to hurt and slights- as you might expect in an LGBT festival. I see it in myself and in queer friends.

Leaving Queer Spirit I resented the cost of the taxi to Nupton, the buses having been cut, but a man joined me and talked of Faerie, halving my fare. It is an alternative gay culture for men tired of shallowly pumping iron and using the right grooming products. He is spiritual but not religious, having had a harmful religious upbringing, and liked my line “I am rationally atheist and emotionally theist: I have a strong personal relationship with the God I do not believe in”.

Then there was the Quaker meeting. It was a Leading to hold it at Greenbelt, but my leading was not affirmed by my Meeting, who had told the Festival there was no one to organise the worship. It felt haphazard, and I felt unprepared. Yet after we had 110 in worship and I introduced it, emphasising the welcome enquirers should expect, I felt vindicated. My leading had been recognised by events.

Nadia Bolz-Weber talked of bodies, how people are ashamed of bodies and how we are fed false ideals which we cannot match. She told us to turn to a neighbour and say something we liked about our bodies. My neighbour had beautiful eyes, and said so. We were in a place, after three days of Festival, where we could say such things.

If women did not spend the energy fruitlessly chasing the beauty myth we could solve global heating.

I spoke into the microphone. I said how after transition I finally loved my body, its beauty and effectiveness, and of how people are also shamed about Gender, and how humanity needs to affirm soft men and powerful women, strong and gentle humans. I asked the speakers to affirm our gender in all its variety and contradictoriness. I got applauded. I am affirmed again.

Another woman said whenever she had an unpleasant experience her mother would ask, “What did you do to cause that?” Such shaming could make a child hide away completely, like a rabbit fearing all attention was predatory. She is in middle age recovering.

Another said as a trans man he wanted chest surgery, yet he also wanted to bear a child and breast feed- but not yet, maybe in six years’ time. How could he live with his body as it is, and all it means to others, in that tension?

I am feeling powerful. My working out my need heals others. Having valued my softness as strength when I saw it as weakness for so long, I can help others free themselves.

This pillar was marked “The wisest thing I ever heard was-” 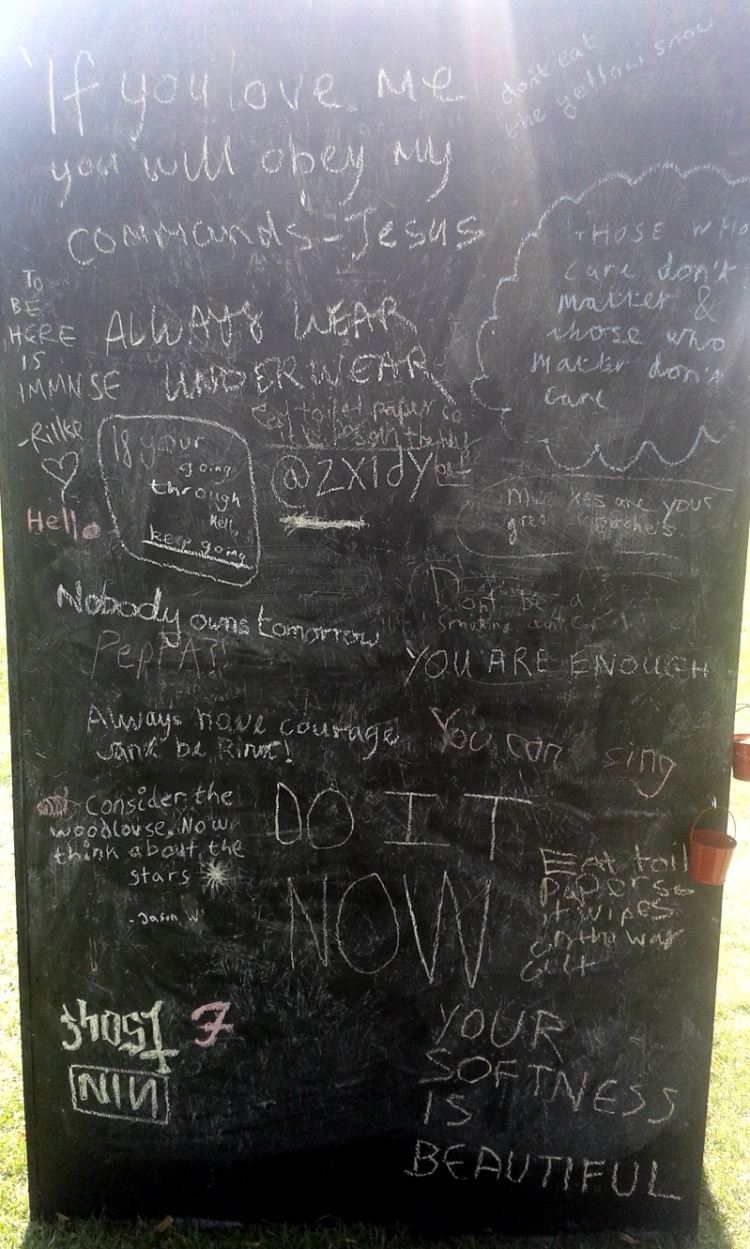