“That was the weirdest film I’ve ever seen,” said J, happily. She had really enjoyed it. “I can’t imagine why you would think I would want to see it,” said H, when I tried to describe it to her. Because it’s The Coen Brothers! They’re brilliant! It’s like a literary novel- think Margaret Atwood- with a huge audience because they are so good. J, H and R had not heard of the Coen Brothers. I am a mad keen fan, and I am perplexed.

George Clooney plays Baird Whitlock playing a Roman Centurion who meets the Christ, who is depicted very tastefully, and only from behind, so we see Whitlock as Aurelius (or something- google will not disclose the character’s name) being beastly to the slaves then confronted by Jesus: and changed, changed utterly. The camera lingers on his face, changing, bewilderment, bewilderment and bewilderment flowing across his features in slow succession.

“Ralph- or Rafe, I don’t know how he says it- is very ugly,” said J. He didn’t need much makeup for Voldemort. Hobie Doyle, athletic, acrobatic cowboy in cowboy movies- the ten seconds when he steals a horse is beautiful- is cast by the Studio in a drawing-room comedy, and cannot say the simplest line, despite the director’s (Raałf’s) cajoling, fawning not covering his loathing and contempt for the star. Hobie’s line is eventually triumphant.

The dance sequences are included in the plot by the hero having to go to the sound stages where they are shot, or to introduce the character of their star. A mermaid emerges from water surrounded by swimming less synchronised than the original would have been; sailors dance in a bar, though the grumpy barman wants them out. I love these. I would not see such sequences on a big screen, not in the kind of film I go to see, not in any English language film this century. 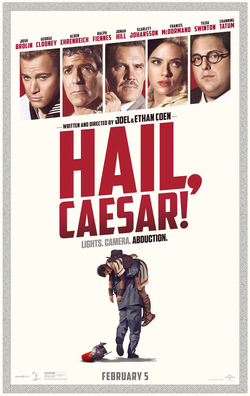 Eddie Mannix dominates his wife. He asks her opinion, and she can barely give it, which would not please H, though he loves her and is giving up smoking because of that. His secretary walks a pace behind, taking terse instruction; he fools the twin gossip columnists; this is a man’s film, in which men do important things and women feature as barely synchronised swimmers. I see the feminist point, but this is a human film, where humans confront reality. Unlike in Trumbo the Communists are fools- but, well, everyone is a fool, and it works out okay for them all, except the Communists. And the gossip columnists. And the little people, who are little people doing little things, though one of them gets to marry a movie-star. She’s in Lust, and she just takes him. I came out happy. J came out happy.