I had not spoken to my neighbour. I said “Hello” when we left our flats at the same time, and he barely responded; and then I walked to the bus stop, and they stopped six yards back, and stared at their phones. I went upstairs on the bus, and went to open all the windows; they went upstairs too, and went to the front. Having intended to go to the front anyway, I sat down opposite them and said,

-You know, you moved in a year ago, and I would be far more comfortable if we spoke to each other.

He explained that the last place they lived was a rough area, and they keep themselves to themselves. They chatted, and I listened in, interjecting occasionally. She likes the pretty houses. What do you think of those?

-They look sort of- Tudor? She is unsure of the reference.
-Yes, that’s the intention, the white and the wood.

-Well, you use a plastic bag, you are not actually touching the stuff, I said. It was the wrong thing to say. She started talking about organising the right photographer, and the right “make-under”. This is not a conversation I could take part in. “It is important to look around,” she says. “The reviews are no good because they are only going to publish the glowing ones.”

She sounds a bit obsessive- yet she is upstairs on the bus, looking out the front window. It is a deeply unsophisticated pleasure, usually for children, and I can’t get enough of it. And on a hot, sunny day? I sense a kindred spirit. She complained about him swearing- “Language,” she said, half rebuking, half wheedling, and I said “Peeved” is a good substitute for “pissed off”. She said “See you.”

I was sitting in the yard and met Andrew/ Andy as he returned from work. He is at the outdoor centre, as were the other tenants in that flat. I had not known it was an avowedly Christian organisation: he is with a “new frontier” church in Zhuzhkov- he is hesitant, as if he does not expect me even to have heard of his denomination. He is going now to prepare a Bible study on Job. I like Job, I tell him.

I must have a change from Cranach, but here is Venus and Cupid the honey thief. Google translate has mixed success with the Latin: if you know better, please share.

When a child steals a bowl of honey Cupid
Furano finger careful punxit APIs.
So too short for us and die of pleasure.
He is seeking a melancholy mixed feelings hurt

However, a search found this. And this. 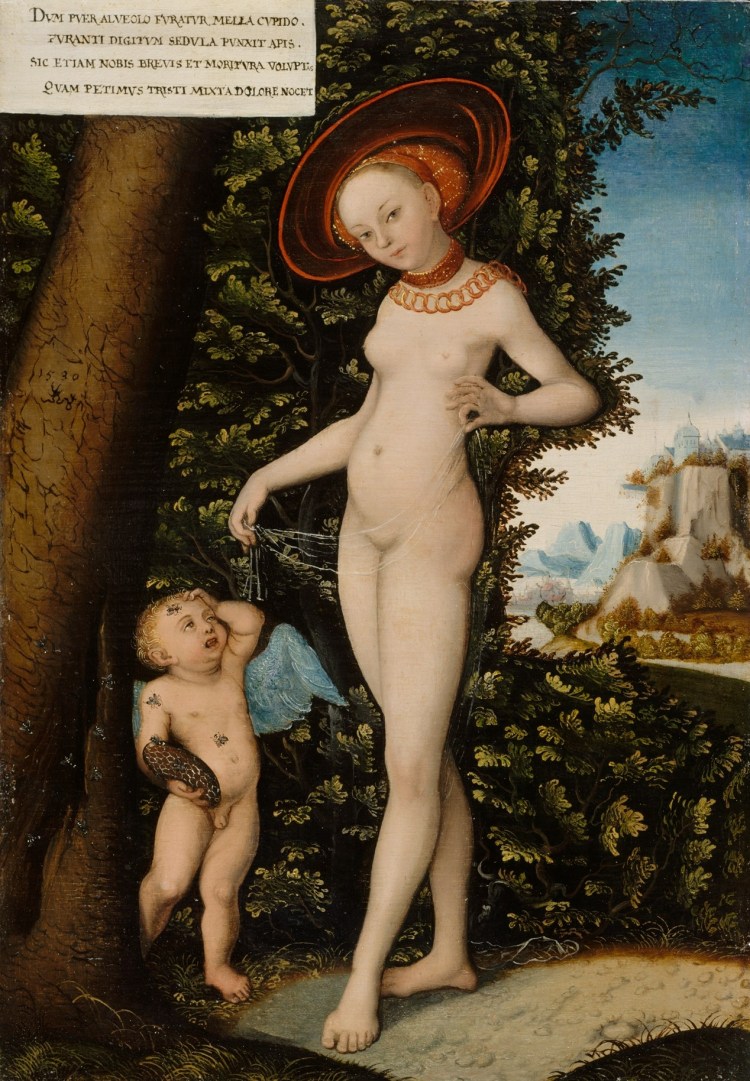 3 thoughts on “A suit of armour”