I wanted to see what artists are talking about Now, what they are saying and how they are saying it. Having had poor reviews, the Turner Prize exhibition is quiet on a Sunday morning.

I assumed this woman was the artist Ciara Phillips herself, but it seems not. I found the subject attractive. “She looks intelligent,” I said. H pointed out how unfeminine she looks. We had been discussing this. A woman told M he was responding like a child, and she wanted him to Be a Man. I translated that: “You are responding how I don’t like, and I want you to respond how I want”- but arguably “being a man, manly, masculine” is a good thing. In 5Rhythms dancing I have wrestled a man on the ground- being a Man- and at country dancing I have faced a man less than a yard away, both of us doing cuts and points and Heuching. It is exhilarating. Once I heuched like that and the other recoiled, and I felt abashed. And, I am still Feminine. I prefer it. I see how a strong woman would resent being labelled as unfeminine- wrong, even unnatural- and resist “feminine” being held up as any sort of ideal, and still I run from “masculine” in the same way. Yes, it’s great. It’s not for me. By all means, M, have fun with your Masculine side, explore it, even find how you like it when with women, but don’t fall for this idea that “manly” is in any sense a better way of being, even for manly men. How you are is the better way of being.

Well, it was in our minds before we went, and I could not say that is what Phillips intended to say, but that picture brought up something for me which H helped clarify. It was repeated, in the middle of the floor from floor to ceiling, and repeated on the walls. I found myself playing spot the difference between the iterations, and could not. The blurb at the door told me there was a “Reassuring OK” on the wall, which I did not take literally- H did- so seeing it printed in colourful letters on yard high paper, framed behind glass, I gave a shout of laughter which caught the attention of the two other people in the room, briefly. Most British people my age would think of “the words ‘Don’t Panic’ in large friendly letters”.

You see, I am not an art critic. The Independent might call it “maddeningly derivative 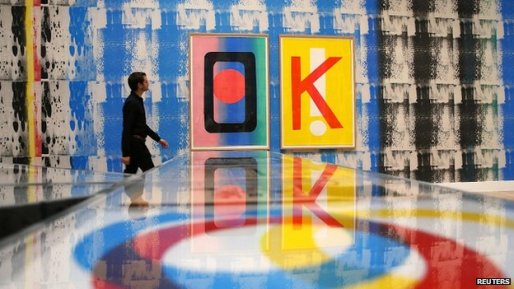 and lazily opaque”, but I do not know from what it is derived, and work to find meaning in it, or a response. The photo from Reuters is art in itself, using the horizontal K as a reflective surface, a view of the room I had not seen. There was a horizontal O, four feet across, ten feet high and open for me to walk in. At eye level hundreds of phrases were written out, in alphabetical order- “How are you?” before “I don’t give a shit”, and were read from a loudspeaker above, in alternating male and female voices. I found the voices youthful and beautiful. I felt enclosed in that O, which I found pleasant, even reassuring.