If the Jews obeyed the Torah completely even for one day, the Kingdom of Heaven would come. What would that mean? For me, it means everyone obeying the laws of God- love God, and love everyone else. Do to them as they would have done to them. For a strain of Christianity, it means Rapture, end of the laws of physics and resurrection of the dead. For the Jews of the first century CE, it meant all humanity would worship on the Holy Mountain, that is Jerusalem. Many of them thought this would be by conquest.

There are 235 uses of the phrase “Lord of Hosts” in the Old Testament, and only two in the New Testament, one of which is a quote. Malachi, prophesying during the reign of the Persians, complained that the worship in the Jerusalem temple was inadequate. He wrote And you shall tread down the wicked, for they will be ashes under the soles of your feet, on the day when I act, says the Lord of hosts. God would conquer the other nations, who would submit.

Then Alexander conquered the Persians, and his successors in Egypt then Syria took control of Judah and Galilee. Just as Antiochus IV Epiphanes (Revelation) of Syria decided finally to Hellenise the Jews, setting up his altar in the Temple and provoking the Maccabean revolt, Roman power was rising. Mattathias killed a Jew sacrificing on a pagan altar, and the Greek official enforcing it, and his sons led the revolt and became rulers and high priests in Jerusalem. Jews interpreted this as God acting to defend his people. 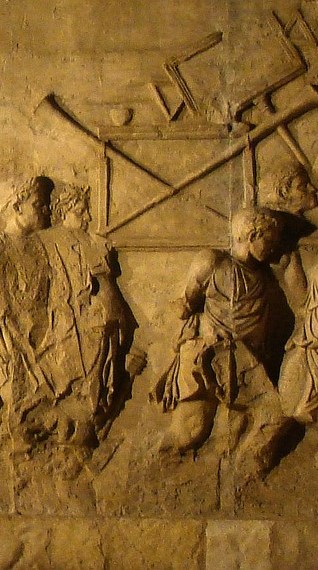 They celebrated the festival of Hanukkah yearly to remember, and read of it in the books of the Maccabees.

The Israelite covenant with God had been that the people would obey the Torah, and God would look after them. In 63BCE, Rome conquered Jerusalem and made the Jewish kingdom a client state; and in 6CE Augustus placed it under direct Roman administration. God would set the Jews free if the Jews kept their part of the Covenant; but the Messiah, a military leader, had not come. So, the temple worship was untrue, the Essenes said. The Pharisees devoted themselves to keeping Torah. Jesus prophesied that the Jews would revolt, and the Romans crush them: his new concept of the Kingdom of Heaven was the law of Love and non-violence.

In 66-73 the Jews rose. They fought among themselves as much as against the Romans, because of differing interpretations of how Jewish behaviour would please God enough that he would rise up and defend them. In 70AD Titus destroyed the Jerusalem temple. In 132, Simon Bar Kochba led a second revolt, put down in 135 with the expulsion of the Jews from Jerusalem. The Jews preserved their identity as a people through obedience to Torah, despite dispersal and persecution.

Religion may be abused, but at its best inculcates disciplines, practices and a sense of community which is good for humanity. Beware magical thinking, that God will look after me if I perform acts pleasing to God, unrelated to practically achieving my goals. The pictures are of the Arch of Titus, commemorating the removal of temple treasures to Rome.