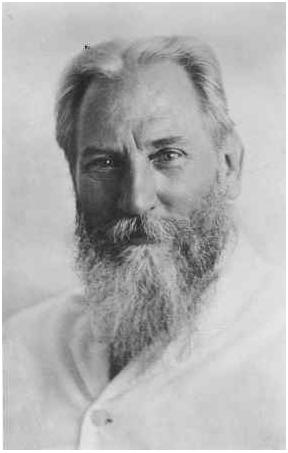 I am a link in the golden chain of love that stretches round the world, and I promise to keep my link bright and strong, the Theosophist child recited. In 1875, Madame Helena Petrovna Blavatsky and the civil war veteran Colonel Henry Steel Olcott, clairvoyants both, founded the Theosophical Society, “to form the nucleus of a Universal Brotherhood of Humanity”. They took ancient traditions of the East into their creed.

Mankind evolves through reincarnation towards perfection. The Masters had reached perfection. There were many masters, but Master Morya and Master Kuthumi took the Society under their special protection. They lived in a ravine in Tibet. Madame Blavatsky claimed to have lived with them for several months, being given the teachings which she passed on in her books Isis Unveiled and The Secret Doctrine. The Masters could materialise in other places, and communicate with the leaders of the Society. On the strength of the first chapter, I find Isis Unveiled huge fun, with “hermetic wisdom” in sonorous language. 70,000 years ago humans had a spiritual golden age, from which the race has degenerated to the fleshly lumps we see today. It has lots of citations, none of which I can trust.

The Bodhisattva, Lord Maitreya, would take over a human being when the world had especial need of him, including Jesus; and the Theosophists believed he would take over the body of the young Jiddu Krishnamurti in the same way.  The clairvoyant Charles Webster Leadbeater, a former Anglican priest, became a leader. He was the spokesman of Master Kuthumi, and guided his disciples along the path of Discipleship, through the stages of Probation, Acceptance, and five Initiations culminating in Adepthood, the attainment of perfection. Leadbeater would take sleeping candidates to the house of Master Kuthumi in the astral plane, and tell them in the morning whether they had successfully attained that stage on the path. This gave him great power over his flock. In 1906 it became known that he had encouraged boys to masturbate as a way of way of relieving obsessive sexual thoughts, and he was charged with sexual misconduct going beyond that, though these charges were not proved. The society split, and he was required to resign.

On Olcott’s death in 1907, Annie Besant was elected president. She invited Leadbeater to return to the Society and its headquarters at Adyar, south of Madras. They claimed they had reached the fourth stage of initiation, Arhat, when Krishnamurti arrived in 1909 aged 14. In 1911 they set up the Order of the Star in the East to proclaim the Coming of the World Teacher, with Krishnamurti at its head, and Besant and Leadbeater its Protectors.

Krishnamurti, the putative Messiah, remained with the Theosophists until 1929. Then he broke with the society, returned its members’ gifts of land and money, and travelled the world teaching his own philosophy, to set human beings free from the cages which divide us, such as race, religion, nationality, class and tradition, that man to man the world over should be brothers. He refused to be a guru, and especially refused disciples who might build up a hierarchy or religion around him.

From Mary Lutyens’ biography of Krishnamurti.