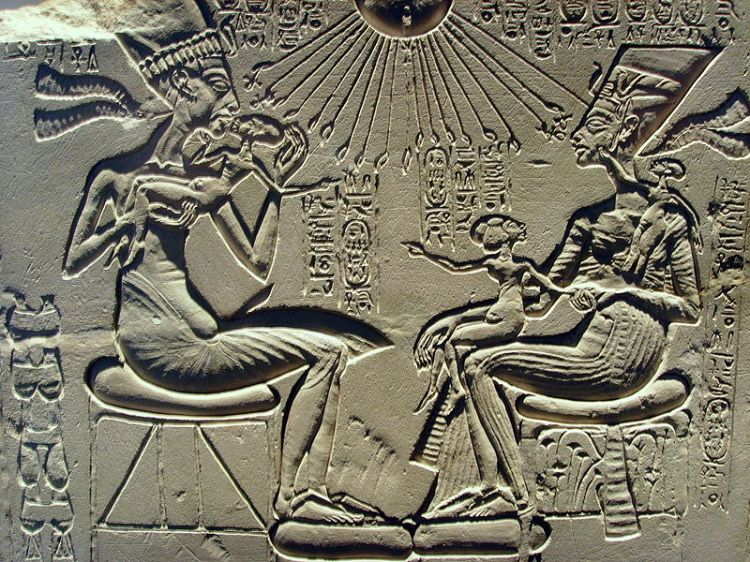 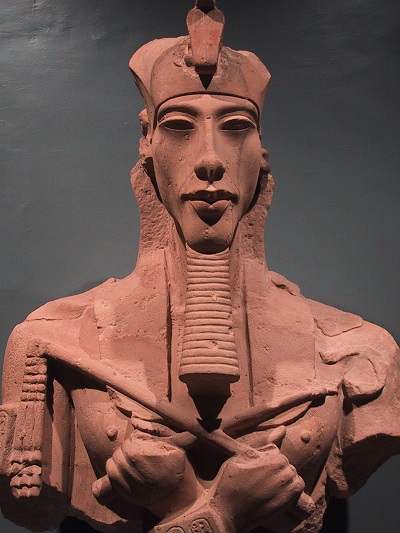 Akhenaten, the first monotheist, had a belief and ritual system very close to that of his predecessors. His rule began around 1352 BC, when Egypt enjoyed a period of unprecedented prosperity. It had hegemony as far north as Canaan and an alliance with Mitanni to the north. Rather than seeing foreigners as the enemy forces of chaos, a view of them as also God’s creation was developing.

Akhenaten was at first the fourth king of the name Amenhotep, which includes the God-name Amun. Originally a local god of Thebes, Amun had become identified with Ra the Sun-god, portrayed as a man with the head of a falcon and the sun-disc above it. Osiris, God of the Underworld, was an aspect of Ra, and increasingly Ra was seen as the creator-God, with other gods aspects of him, or his created beings. Akhenaten’s god Aten was the sun, with the official name The Living One, Ra-Horus of the horizon who rejoices in the horizon in his identity of light which is in the sun-disc, commonly shortened to The Sun-disc, or Aten.

Amenhotep III was seen as the son of Amun-Ra, born of the Queen-mother in a sacred marriage ritually reenacted annually.

However, Akhenaten built his own capital city, Akhetaten, “Horizon of the Aten” where the Aten manifests itself daily. Aten was depicted as a disc emitting rays ending in hands touching the king and queen, Aten’s children, and their family. All other gods, even seen as emanations of Aten, were banned.

Akhenaten was depicted with wide hips, feminine breasts and an elongated face. This style of depiction, as was usual, spread to depictions of his subjects. Portraits showed the royal family kissing and embracing, which was unprecedented. The informality and freedom of expression was a lasting influence for centuries. No statue of the God Aten was necessary: Aten was visible in the sky. The light of the Sun nourished all things continually.

Daily, the King rode by chariot along the 3.5km Royal Road from his riverside palace to the seat of government, symbolising the rising of the Sun. Akhenaten was “the creative manifestation of the Aten” through whom the God did his work. The king demanded total loyalty and worship. The dead existed in the roofless temple with Aten and the king.

After Akhenaten’s death, his cult was expunged. The boy-king Tutenkhaten’s name was adjusted to contain that of the old god, Tutenkhamun. The court moved back to Memphis and the religious centre to Thebes. Akhetaten and its temples were destroyed. The Hittites had defeated Egypt’s northern ally Mitanni, and Egyptian armies in the north failed- a sign that the Gods had deserted Egypt. It is likely that Akhenaten’s body was removed to a small undecorated tomb in the Valley of the Kings.

Here is a translation of the Great Hymn to the Aten, our source for Akhenaten’s doctrines. As before, this post is taken from the Oxford History of Ancient Egypt.

10 thoughts on “Monotheism in Egypt”