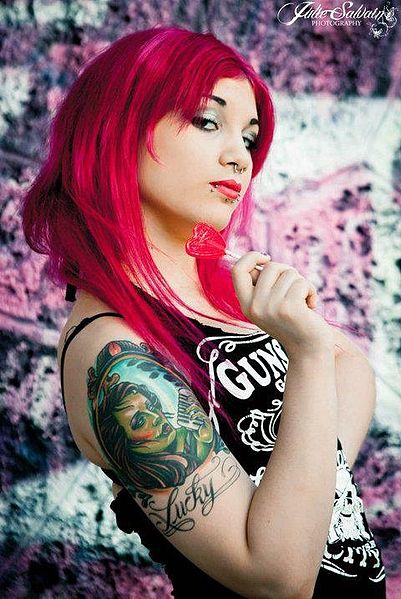 I am not sure how we got on to murder- but all the ideas came from me.

I went into the library, and got chatting to the librarian. I wanted to ask her what quote she had tattooed on her arm. She rolled up her sleeve to show me, “because I don’t read it every day”. It is about how we are surrounded by angels, who support us, and we should practise awareness of them.

-It’s unprofessional to talk about myself. (Oh, what could the next word possibly be? Nothing other than) But-

The tattoos are the history of her life with her husband, ending with a butterfly, her pupation and leaving him. I congratulated her. He was a little scrote, she says, packing great malice into the word. She has been reading the detective fiction in order to get ideas.

-There was painting poison onto a stamp, so that when she licked it, she would die.
-Oh yes, I saw that. Murder in Paradise. I like that, it’s terribly British, isn’t it: fluffy, unserious, always a happy ending. But stamps are self-sticking.

In The Name of the Rose, a monk was murdered by painting poison on his manuscript. As he turned the pages, licking his finger to stick to the corner, he took it in.

-Now all I have to do is poison all the motorbike magazines in the hopes he will buy one.

You could steal a car, knock him off his scooter, then burn the car out. She likes this idea.

-There are people I would like to imprison in a disused nuclear bunker with a plentiful supply of bottled water to drink, and lots of sharp knives. I would have painted on the wall, “If you kill someone you will have something to eat”, and I would switch the lights on and off randomly.

-You’ve thought a lot about this, haven’t you?

-Well, it doesn’t take much to think that up. How do you feel when you kill a spider? You probably couldn’t do it.

-I don’t mind spiders, they don’t do me any harm. They kill flies. I hate flies, I kill them.

Her brother got the huge row for getting a tattoo, so when she got her first her mother was almost reconciled to the idea. They are all over her now. Her mother was a biker-chick, though: she has seen the photos of her mother in leathers. She remembers her grandmother, with a blue rinse, telling her off for dying her hair that colour, and she thought, oh, you can talk. Her sons are learning to drink, but are far less trouble than she was.

In other news: I had a serious WTF moment reading this blogger. He says Christianss are not obsessed with gays, and is bewildered by questions about homosexuality when he has been talking of “the state of marriage”. It is society that is obsessed: Activists want to change the definition of marriage, and they want to require Christian photographers and florists to service homosexual weddings. He presumably thinks that of all Worldly, Atheistical people, gays are the unique evildoers whom Christians should refuse to serve. Go, if you like writers who miss the point, and savour his befuddled, injured innocence.