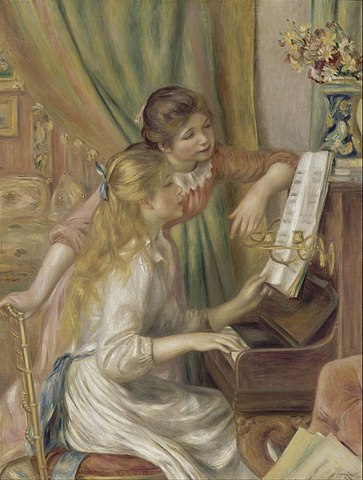 I made a child cry. I am not proud of this.

When I visited last Christmas, Alice, now 15, was playing the piano and about to take grade 3. Since then, she gave up. Possibly she started a wee bit old: by 15, I was playing pieces which interested me, and my obsessive nature kept me on scales and fiddling with a bar until I got it: I spent a week getting the first four bars of the Maple Leaf Rag, aged about 15.

Her sister Olivia, now 7, has started, and is playing tunes with both hands, but not both hands together. I thought the way to interact over the piano was to let her explore it, and ask me for any help she wanted. Her mother told her to play it: she has not been playing over Christmas.

I asked her if she enjoyed playing the piano. “Yes”, she lied. I am almost certain of that. She sounded completely insincere. It was the wrong question. Does she want to play the piano? If so, she might be willing to work at it.

Of course I would like a child mad keen to play the piano, with a clear idea of how to improve at it, natural talent, and a desire to explore my expertise to help her on- but I want to inspire the child, get her interested, and give her some ideas to bring her on a bit.

She needs to count on the notes and count on the stave to work out the first note of a piece she has played before.  I had a trick for H, which was done with me: my parents hold out thumb and fingers horizontally as if on a stave, and indicate a position for the child to name the note. The point is that rather than spending half an hour on the piano, or even ten minutes, which can be tiring and boring, you can do this for half a minute and give the child praise.

When she looks at the score and sees that there is a B♭, next time she sees a B she still plays B♮. I can sympathise with this: it is the kind of mistake I can imagine myself making. And- playing B♮ she hears it is wrong, checks the score and gets it right. This gives me hope. I want to make it easier for her to correct her mistakes.

How I brought a tear to her eye: I explained that a minim, a quaver and a crotchet- the one with the hole, the one with the tail, and the one with neither- last different times, and when she played the piece again with each note the same length, the third time I ejaculated “No!” I suppose I was pushing her to learn something when she found the rest of it difficult enough.

Unfortunately, that evening, they were still tired after their hogmanay party, and I could not enthuse her family to play that game with their hands.