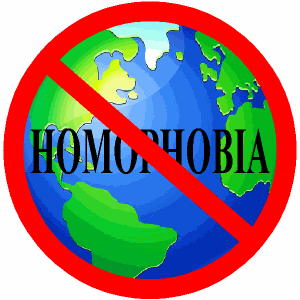 A person brought up in a simple Christian faith, who knows that he is supposed to love his neighbour and that his neighbour includes despised foreigners, and therefore everyone; knows that turning to Christ and walking in Christ’s way is necessary to salvation; knows that gay sex is incompatible with Christ’s way; is comfortably heterosexual himself- this man tells a gay man that he must Repent, and be celibate. He says this is Love: he wants the man to be saved from Hell. He has gay friends. Is this hate or phobia, to tell a gay man to repent, or Love, as he claims?

This is institutionalised homophobia. This person has not taken into himself all the lies taught to back up this position-

Nevertheless he has accepted all the other silliness:

-He believes in a God of Love who damns large numbers of people to everlasting torment
-He believes, wrongly, that the Bible condemns homosexuality;
-He thinks something could be wrong because it is mentioned in the Bible, without any other reason to believe it wrong.

This man’s reaction is hate and phobia, even if he is not conscious of feeling hate and fear: it is an echo of the hate and fear of others. It encourages those who feel and express their hatred and fear of gay people. He reacts as he does because he has not challenged their hate and fear. Such challenging is the heart of the way of Christ.

A moment’s thought will show that the gay person addressed will find the view expressed distressing or unpleasant. Therefore, the Christian has an obligation to check the value of what he says. Is he sure it is true? He is not guiltless if he parrots homophobic rubbish without thought. He is homophobic.

More destructive than institutional homophobia is Societal homophobia, where homophobic attitudes are pervasive in a society.