Durga was the name of the demon whom the Gods could not defeat. So they called upon the Divine Feminine, Devi who has many forms and many names, who manifested and defeated that demon, and took his name. Free Durga wallpapers available here. She rides on a lion or tiger. This was the first picture I saw of her: I love the light of the Goddess in the dark valley, and the determination on her face; and I have seen sweet smiling Durga figures. I was not quite so keen on the sweet and smiling, until I thought that however feminine the look, the power is still there. 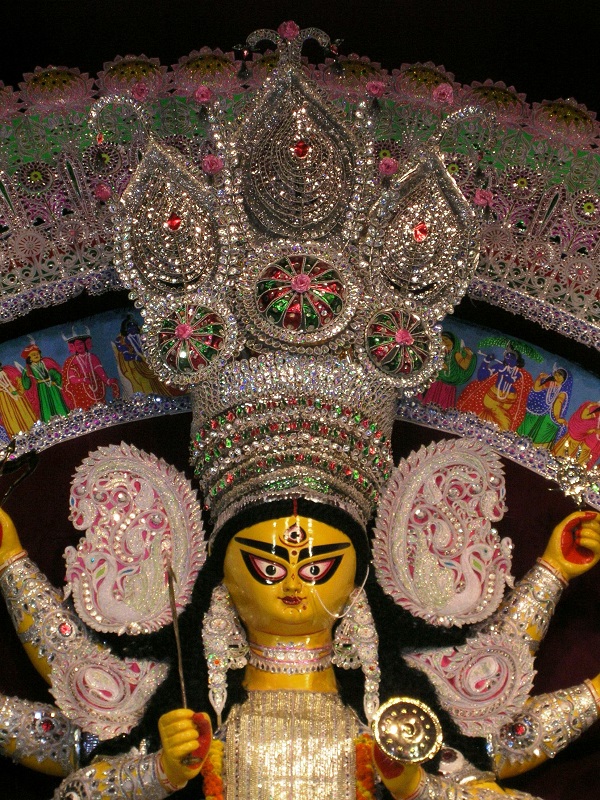 Here I read that

An embodiment of creative feminine force (Shakti), Durga exists in a state of svātantrya (independence from the universe and anything/anybody else, i.e., self-sufficiency) and fierce compassion.Durga manifests fearlessness and patience, and never loses her sense of humor, even during spiritual battles of epic proportion.

Then I found the same text on Wikipedia.

In Paradise Lost, the Greek and Roman gods and goddesses are demons, who delude and betray their worshippers. To me, they are many things, and I feel quite comfortable calling myself Christian and using Hindu stories. Perhaps the Goddess is a spirit, and if she is powerful that does not make her evil or harmful. Perhaps she is a manifestation of Spirit, or an archetype of Femininity, which relates to aspects of the human in each person. Perhaps she is merely a story, which may resonate with a human being, allowing me to call forth aspects of myself at need. Whichever, she speaks directly to my heart and feelings and intuitional self, bypassing the intellect with its need to control and classify and define.